Things to do in Shrewsbury

This guide covers some of our favourite things to do in Shrewsbury and around Shropshire.

What’s going on in Shrewsbury?

The town of Shrewsbury is a historic medieval settlement situated in Shropshire, only nine miles away from the Welsh border and surrounded by the Shropshire Hills.

Although it may look like a sleepy town with a rural backdrop, there’s a lot going on in Shrewsbury.

It’s a wonderful place for family days out with the kids with activities happening throughout the year, but if you prefer something a bit more peaceful then there are walks through beautiful gardens and parks. Not to mention historical sites like castles, churches and buildings of interest, like the home of Charles Darwin.

We also have a whole host of independent shops, and cafes for when you’re feeling peckish or in need of a caffeine fix. Then there’s our river the Severn, the longest river in the United Kingdom, which encases the town centre.

So here it is, our definitive list of things to do in Shrewsbury.

The River Severn is the star attraction of Shrewsbury, and she’s carved her name into the town making it the place that you see today.

A relaxing way to experience the River Severn is on our passenger boat, Sabrina. Enjoy breathtaking views from Spring through to Autumn on our daily cruises which last approximately 45 minutes.

Every Tuesday as the light fades to dusk, we run our much-loved Tuesday evening dinner cruise. We offer a large selection of dinner options from one of our four partner, all of which are just a short walk away.

If you’re looking for something even more laid back then the Sunday lunch cruise is for you; a 45-minute cruise where you can appreciate the spectacular views along Shrewsbury’s River Severn. Once we’ve docked it’s just a five-minute walk to The Bucks Head Inn. On arrival, they’ll serve your delicious 2-course Sunday lunch making a fitting end to a thoroughly enjoyable afternoon.

Probably the most unique of all the things to do in Shrewsbury is our music-themed boat cruises. Each cruise lasts around 3 hours, departing at 7:30pm with DJs spinning classic tunes to suit the evening’s theme. Once docked, we party until midnight.

Other theme nights include the Summer BBQ cruise, wine and cheese tasting, gin masterclasses and a range of other events. 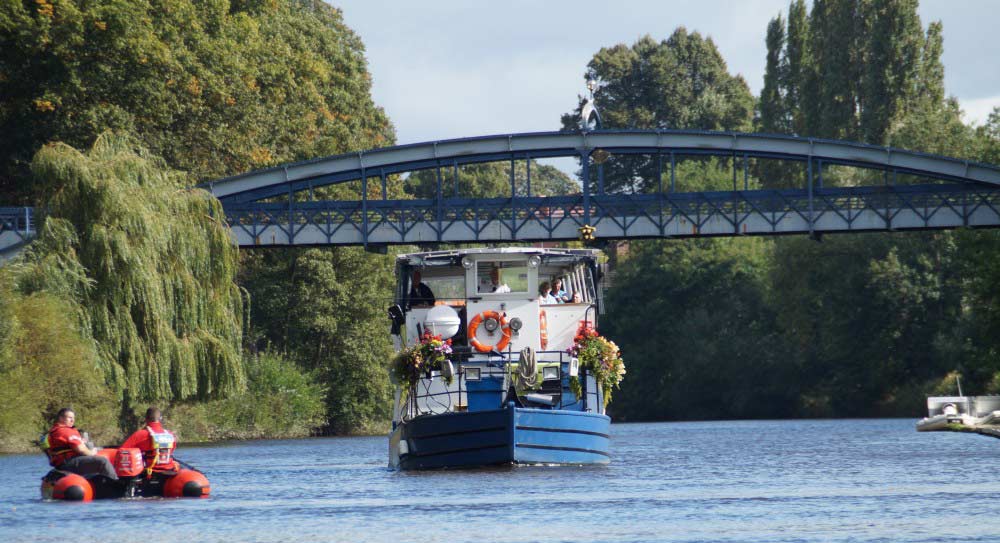 A must-see for any visitor to Shrewsbury.

No visit is the same; there are always lots of different things to do at the Shrewsbury Museum and Art Gallery. Highlights include touring exhibitions and children’s activities, perfect for family days out in Shrewsbury. Not to mention a range of arts and crafts workshops, performances, and a host of unique festivals. 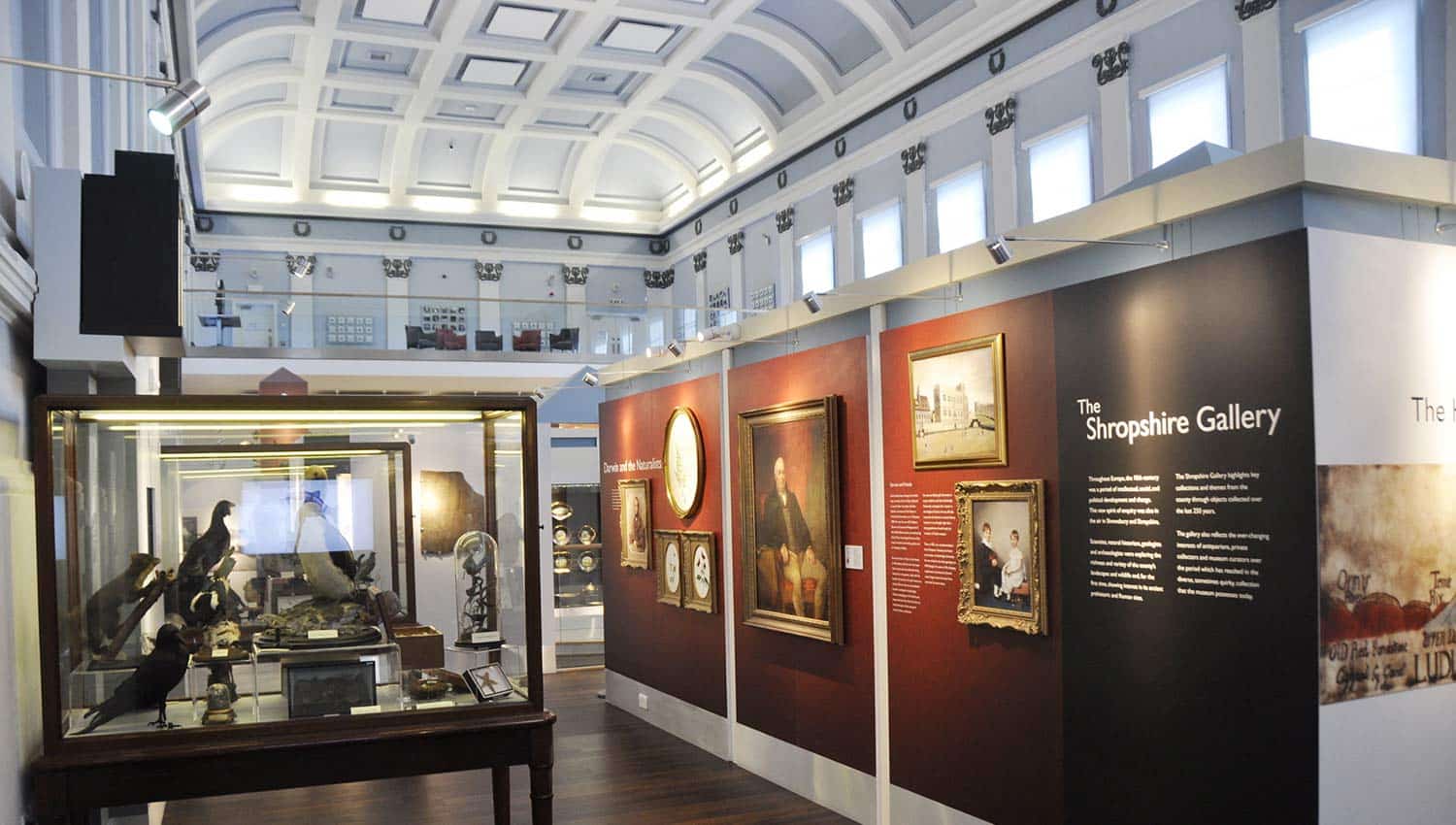 “Shropshire Museum” by Shropshire & Telford TSB is licensed under CC BY 2.0

Attingham Park is a National Trust site on the outskirts of Shrewsbury and is one of the best places to visit in Shropshire for the whole family. It features an elegant Regency mansion set in a great estate that includes a deer park, walled gardens and acres of beautiful country park.

Highlights of the mansion include an impressive picture gallery, atmospheric dining room and breathtaking boudoir.

If you’re visiting in Spring, then you’ll be in for a treat. Bluebells transform the woodland with a carpet of blue, attracting tourists from across the UK and beyond.

“Attingham Park” by Tony Hisgett is licensed under CC BY 2.0

A real highlight of Shrewsbury is the historic church trail.

Enjoy a self-guided trail around the town which includes St. Chad’s Church, the largest round church in the UK which overlooks The Quarry. Learn about its controversial history and the part Thomas Telford played in the original St. Chad’s Church.

Shrewsbury Abbey, home to TV series Brother Cadfael, is on the outskirts of Shrewsbury situated near the English bridge.

Visit the beautiful St. Mary’s Church where you’ll find an interesting plaque above the right-hand side of the main entrance.

And Shrewsbury’s Catholic Cathedral, although not as grand as some of the other Churches, it’s a place of intrigue. 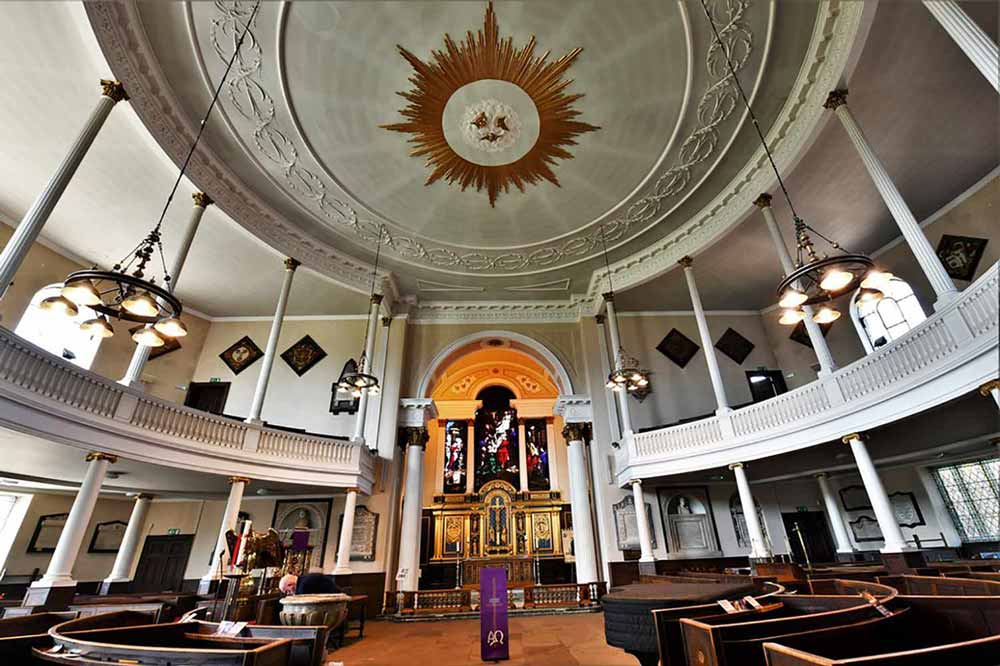 “Shrewsbury, St. Chad’s Church” by Michael Garlick is licensed under CC BY 2.0

Shrewsbury Castle is the epitome of defensive positions, being surrounded by the River Severn loop. Although the castle’s strategic position was the envy of many an enemy, the original structure was mostly raised during the Norman invasion and gifted to Roger de Montgomery in 1070.

The building you see today was part of the new defences built by Edward 1 during his conquest of Wales in the 13th century.

During the English Civil War, the castle was a royalist stronghold but was sacked after Parliamentarians were let in by a traitor at St. Mary’s Water Gate (known as Traitors Gate). Otherwise, the castle remained an impenetrable fortress.

Restored in 1790 by Thomas Telford, Shrewsbury Castle remained a place of residence until the Shropshire Horticultural Society purchased the building in the early 20th century and is now home to the Shropshire Regimental Museum.

While you’re here don’t miss a chance to see Laura’s Tower; if you’re lucky you might get a chance to walk up the terrace which offers panoramic views across Shrewsbury and the surrounding countryside. 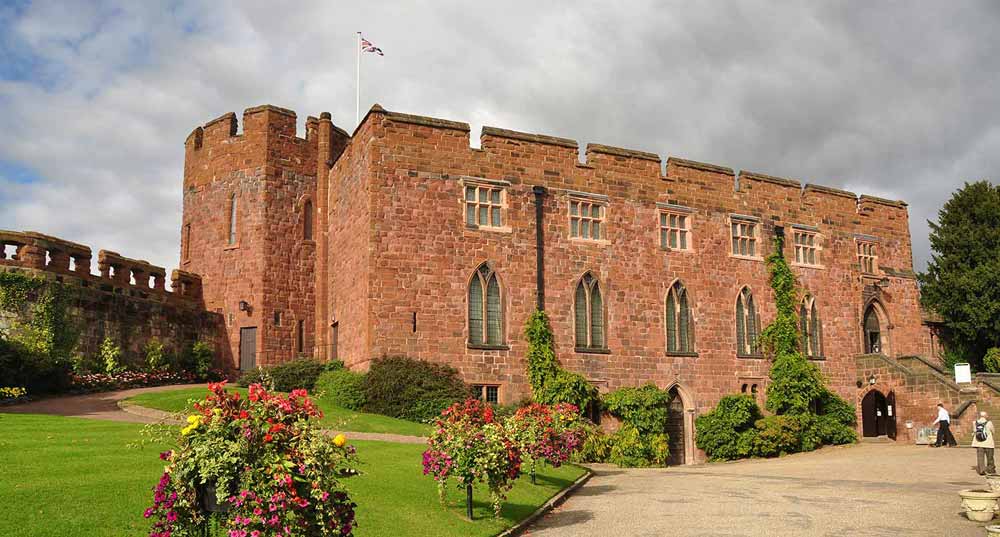 “Shrewsbury Castle” by Nilfanion is licensed under CC BY 4.0

Wroxeter is older than Shrewsbury and was once the fourth largest Roman city in Britain. In fact, the people who lived in the Roman City were likely the same people that founded our own town.

Visitors to Wroxeter can take a tour around the fascinating ruins and the museum, and even take an audio tour to reveal how Wroxeter worked in its heyday. 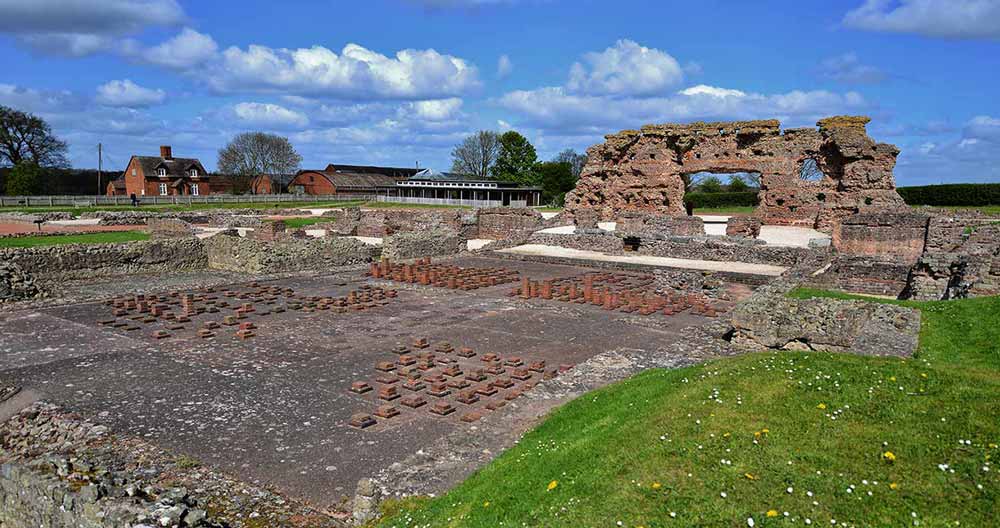 “Wroxeter Roman City” by HARTLEPOOLMARINA2014 is licensed under CC BY 4.0

Perfect for wandering through on a summers evening or any time of the year for that matter, the Quarry has been a popular place to visit since the Victorian era.

Believe it or not, many of the sandstone buildings you pass on your sightseeing trip are made from the stones taken from the original sandstone quarry.

These days we have the fantastic Dingle, an ornamental garden which was initially designed by Percy Thrower, the original BBC Gardener’s World presenter.

Another highlight in Shrewsbury’s calendar is the Food Festival, also held in the Quarry. A whole weekend of fabulous, locally sourced food and drink, all offering delicious samples so you can try before you buy. 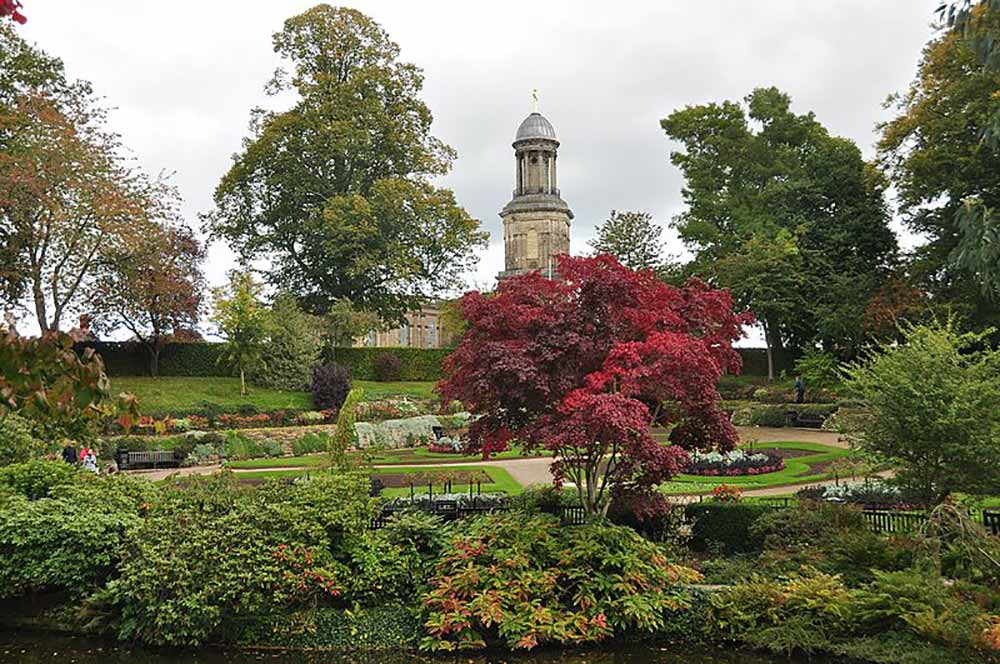 “The Quarry Shrewsbury” by Nilfanion is licensed under CC BY 4.0

The Shropshire Hills dominate the landscape surrounding Shrewsbury. Some of the closest of the Shropshire Hills include Caer Caradoc which can be seen towering over Church Stretton not far from the A49. Caradoc is not only one of the most beautiful of Shropshire’s Hills but it’s also home to an impressive Iron Age hillfort.

Looking to the south of Shrewsbury, you’ll find it hard to miss the Long Mynd, owned and managed by the National Trust.

We suggest a visit to Carding Mill Valley, as it’s a perfect place to hang out on warm summer days. 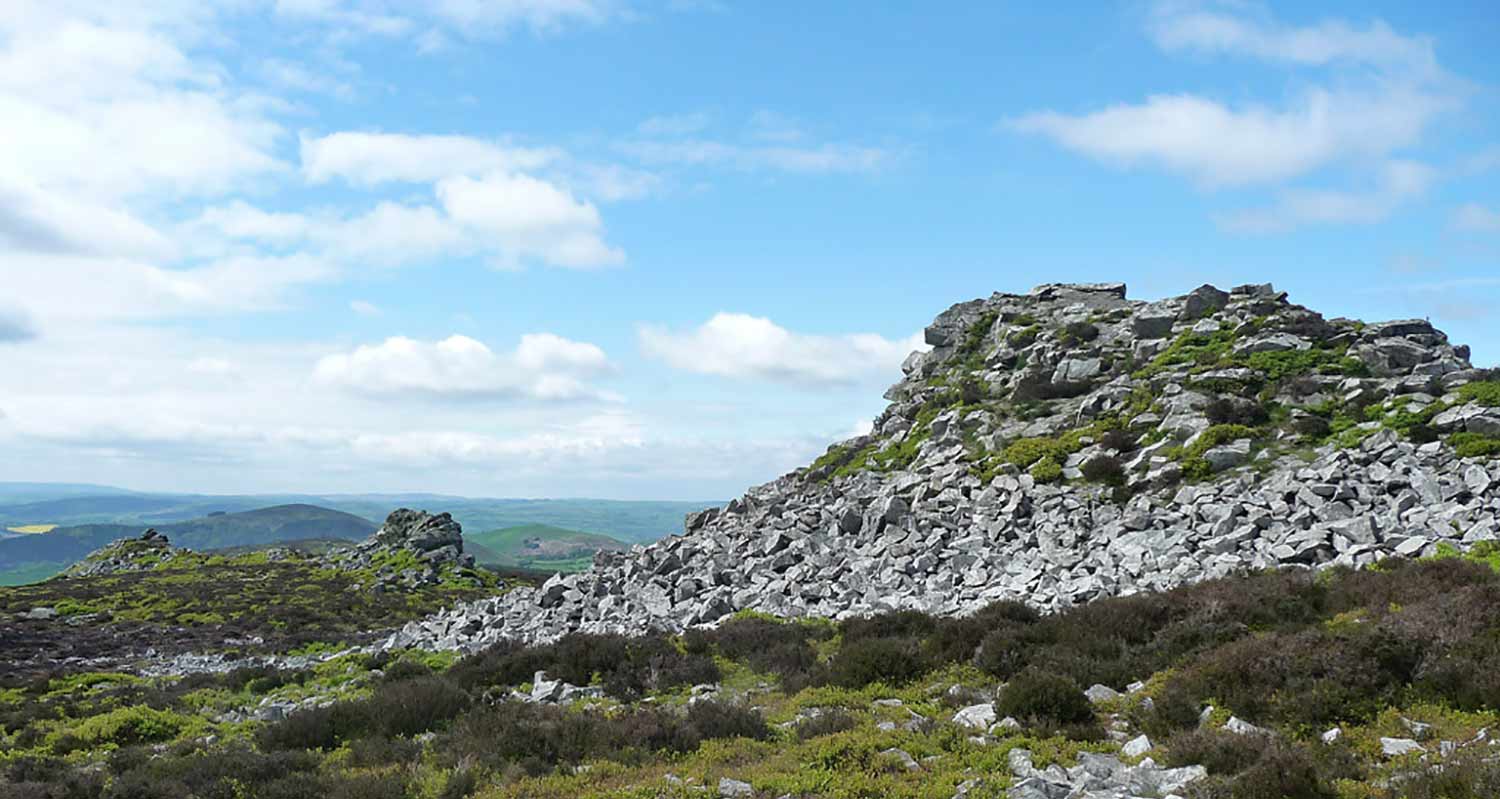 “Cranberry Rock, Stiperstones” by Stephen Richards is licensed under CC BY 2.0

Further along the River Severn is the Ironbridge Gorge. Formed by a glacial overflow at the end of the last Ice Age, it is now the location of the famous Iron Bridge, which was the first bridge in the world to be made of cast iron.

Ironbridge Gorge is a UNESCO World Heritage site, so well worth a visit if you’re planning a day out of Shrewsbury. 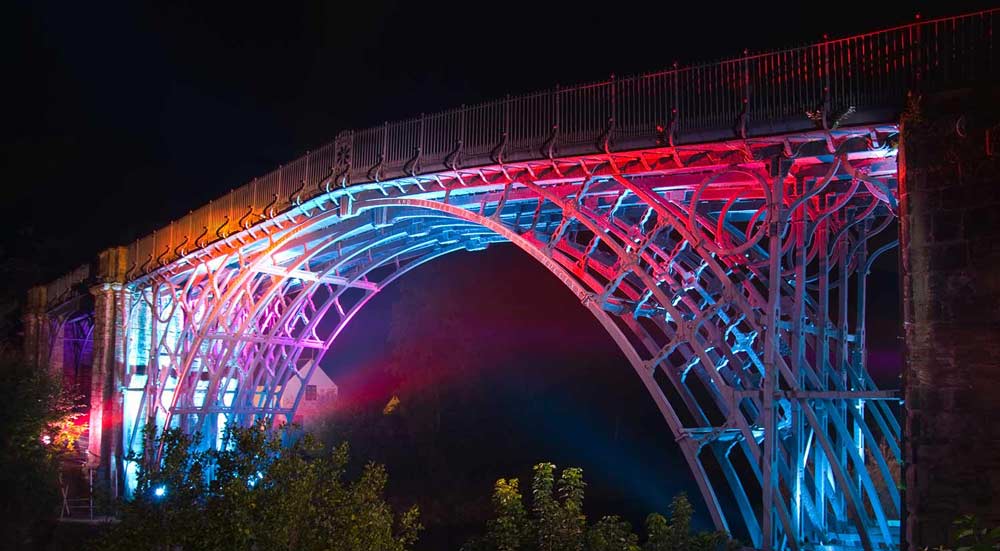 Ironbridge, one of the most popular places to visit in Shropshire.

One of the most unusual things to do in Shrewsbury is to visit the Dana Jail.

Although HM Prison Shrewsbury was decommissioned in 2013, the Dana Jail is open for visitors to experience something rather extraordinary. Led by ex-guards you’ll explore the dark history of this Victorian building (which sits on top of the original Georgian building) while looking around the cells, hanging room and communal spaces which give an insiders look at the life of an inmate. You can also take part in one of the exciting escape rooms offered at the new attraction. 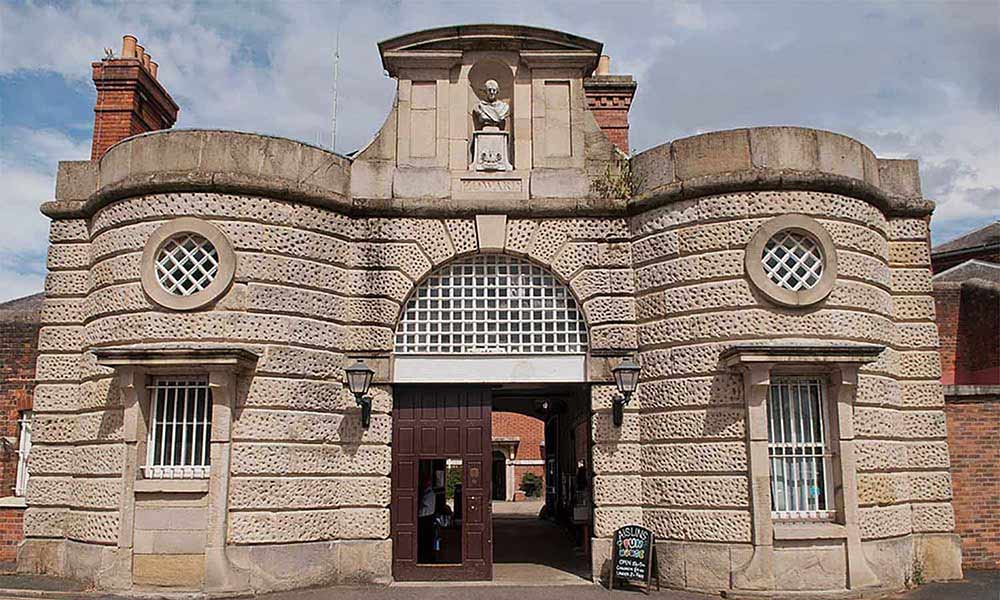 Theatre Severn is a modern theatre with a traditional feel where audiences can enjoy performances in drama, dance, music and comedy. Home to a 650-seat main auditorium, the venue attracts some of the best touring productions and companies renowned at both a national and international level. 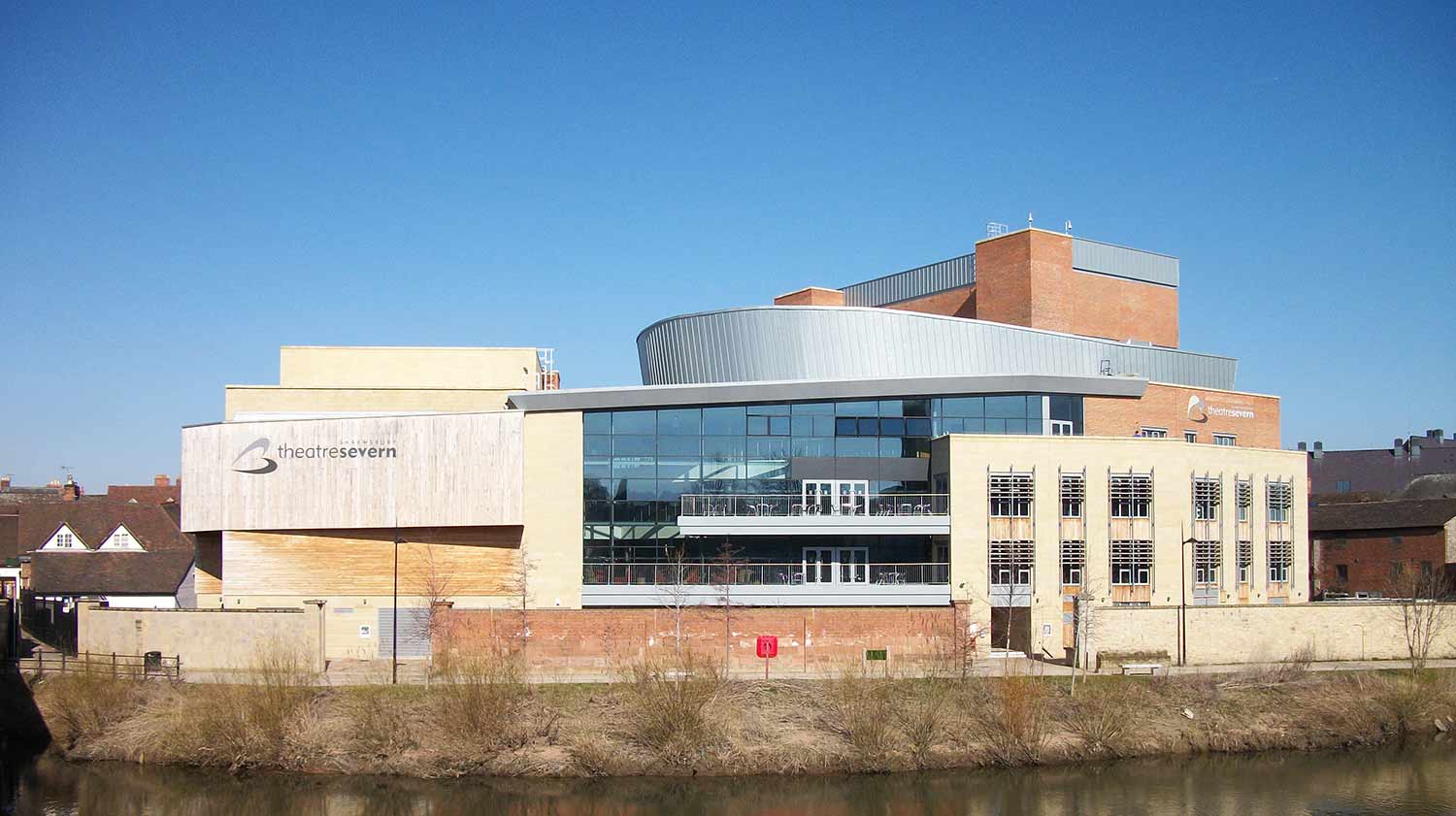 “Theatre Severn” by JThomas is licensed under CC BY 2.0

A newer face in the town of Shrewsbury, Albert’s Shed has quickly gathered a reputation for being the place for gigs in Shrewsbury. It’s smaller than the Theatre Severn but has a strong focus on supporting local musicians and touring artists who play original music in Shropshire. 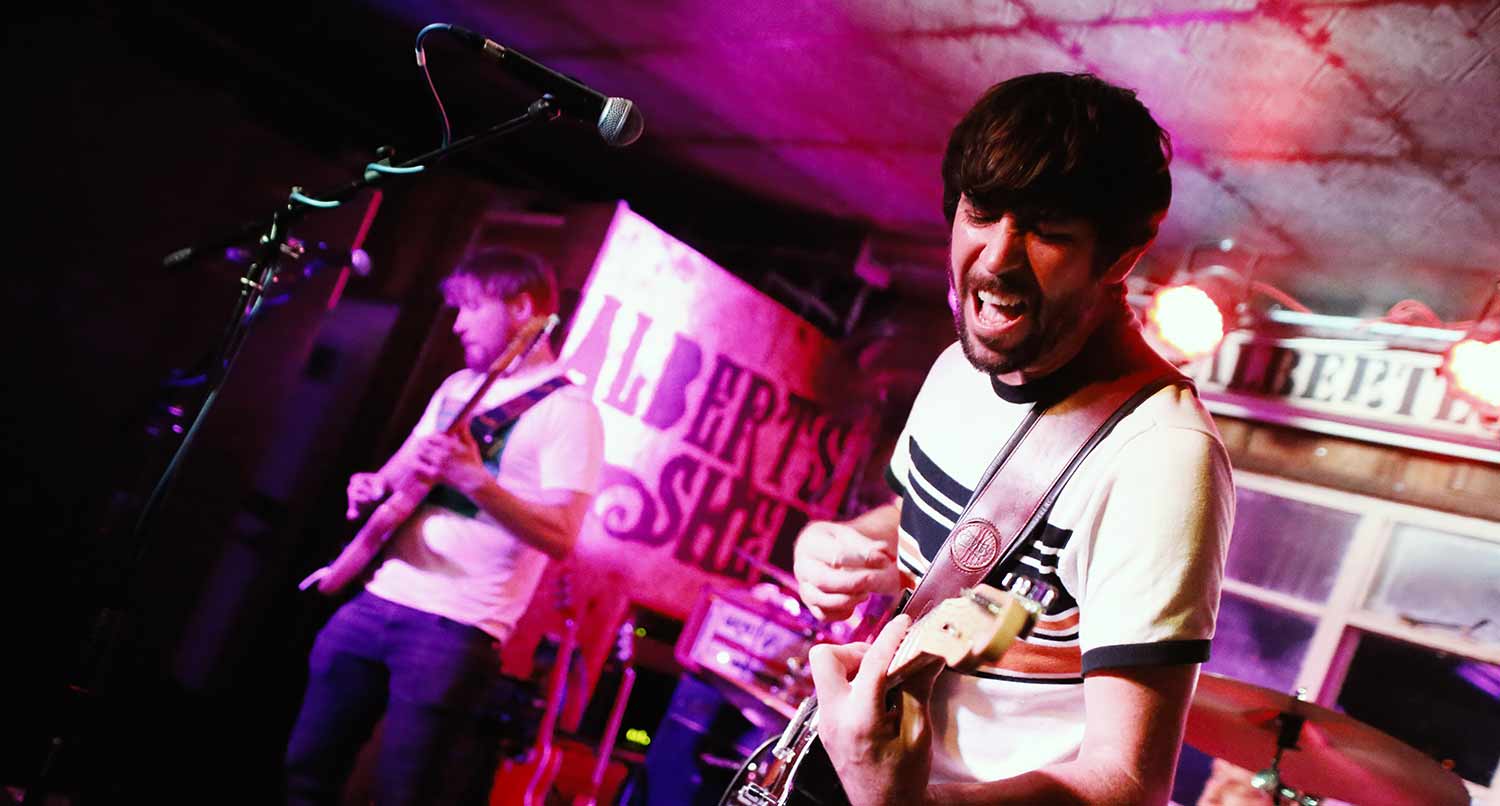 The Old Market Hall is an excellent one-room independent cinema owned by Theatre Severn group. Not only will you find their collation of films and movies to be refreshingly inciteful, but the building is quite something else. We recommend taking a look at the clock mechanism at the back of the café, it’s quite a timepiece.

We also recommend looking a look beyond the norm, to find the cool and unusual things to do in Shrewsbury and discover a town with hidden stories that time forgot. 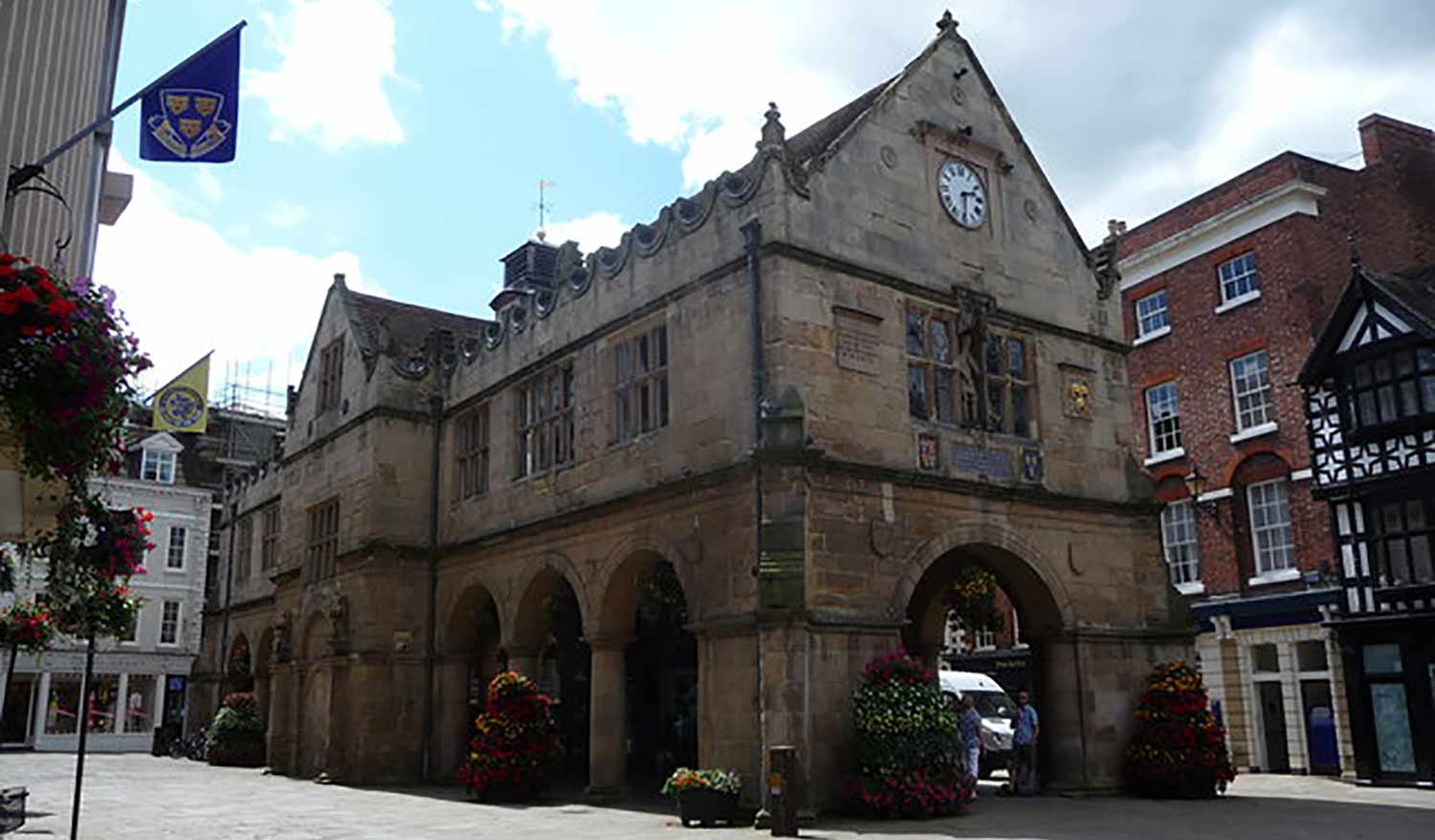 “Old Market Hall” by Jeremy Bolwell is licensed under CC BY 2.0

There are many great shops in Shrewsbury town centre. Alongside the usual high street names there is an array of unique fabulous independent retailers. Explore the quirky bookshops, antique shops and clothes shops – there’s something for everyone.

Shrewsbury’s town centre is quite a marvel, with over 600 listed buildings spanning across the eras.

The Town Square is possibly the most impressive area with a number of marvelous Tudor buildings. Their iconic black and white timber frames date back to a time of extreme affluence at the peak of the wool trade.

As you explore the many independent stores (which outnumber chain stores 2 to 1) you’ll notice lots of little passageways called ‘shuts’ which lead you through Shrewsbury in time traveller-like fashion to discover the town in another light.

Grope Lane is a particular favourite passageway with a seedy backstory, but these days there’s something rather more magical at the end, a shop called Labyrinth which stocks a multitude of official Harry Potter merchandise.

Shrewsbury’s award-winning market hall is home to many traders, offering fresh fruit and vegetables, meat, poultry and fish, delicatessen, books, china, antiques, contemporary crafts and interior furnishings… to name a few! There are also delicious cafes and eateries to choose from. The market hall is very unique with a modern, quirky take on a traditional indoor market.

You won’t starve in Shrewsbury – the town has so many fine eateries you won’t know where to begin. From little sandwich shops, traditional pubs, and fast-food restaurants to European bistros and traditional fine dining, Shrewsbury’s Restaurants have something to suit every palate.

If you’re making a trip to Shrewsbury then you’ll be spoilt for choice when it comes to places to drink with more than 100 pubs, wine bars, cocktail bars, and clubs in the town area.

Why no try one of our favourites, Albert’s Pour House. Café and milkshake bar by day, and trendy cocktail bar at night, it’s the perfect place to indulge the family. They’re family-friendly up until 6pm, and dog-friendly too. Thai-D Food Bar can be found above Albert’s Pour House, serving up amazing authentic Thai food. 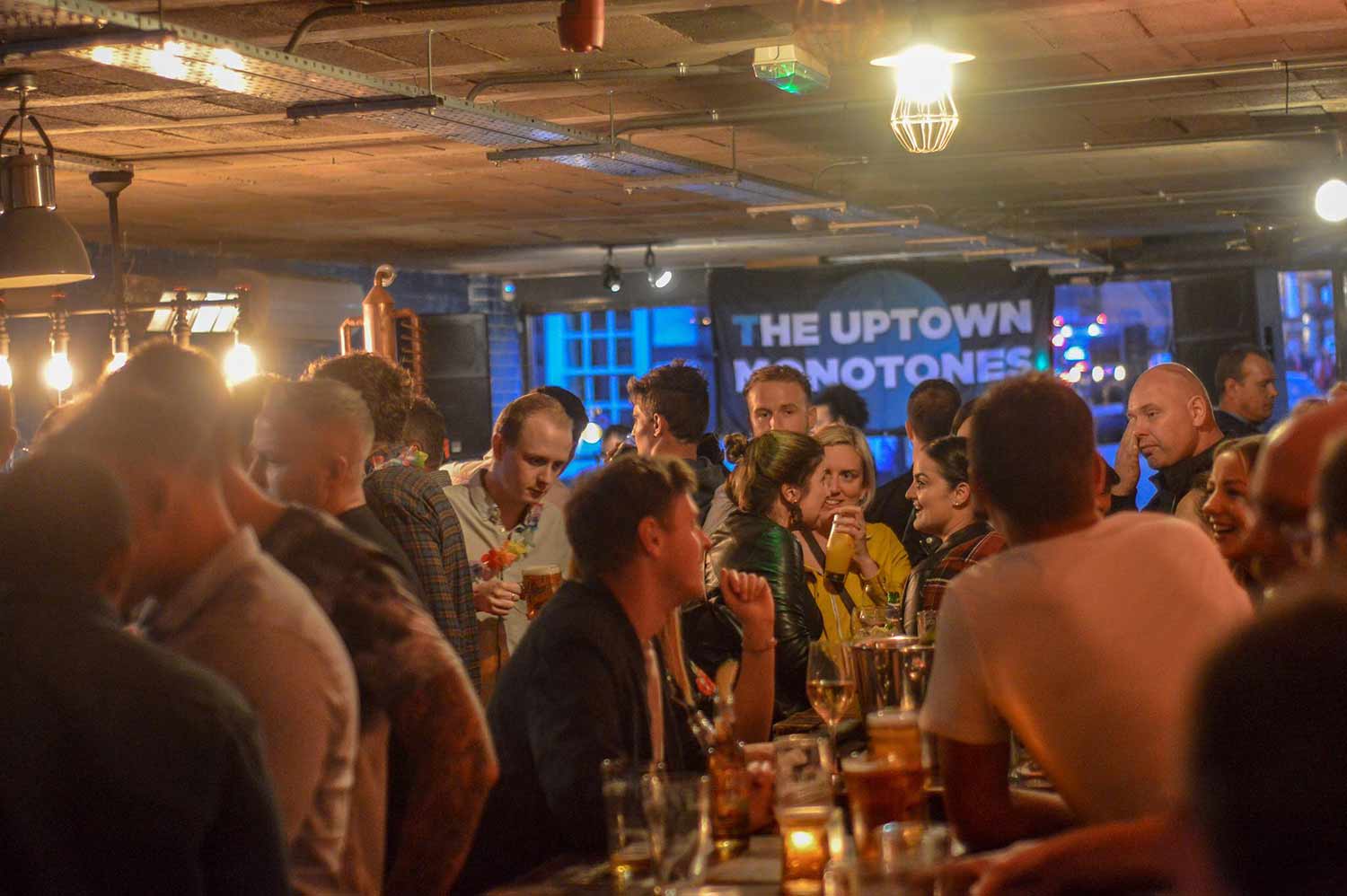 Albert’s Pour House is the ideal place to visit with your pooch.

Our gift vouchers make the perfect present for any occasion. Vouchers available for day trips or one-off themed nights.

Join us on a virtual journey to discover some of the sights and history you’ll see on your voyage along the Severn aboard Sabrina.

Don’t just take our word for it. Take a look at what our happy passengers have to say about their Sabrina experience.