Home/Posts/Cool and Unusual Things to Do in Shrewsbury

Cool and Unusual Things to Do in Shrewsbury 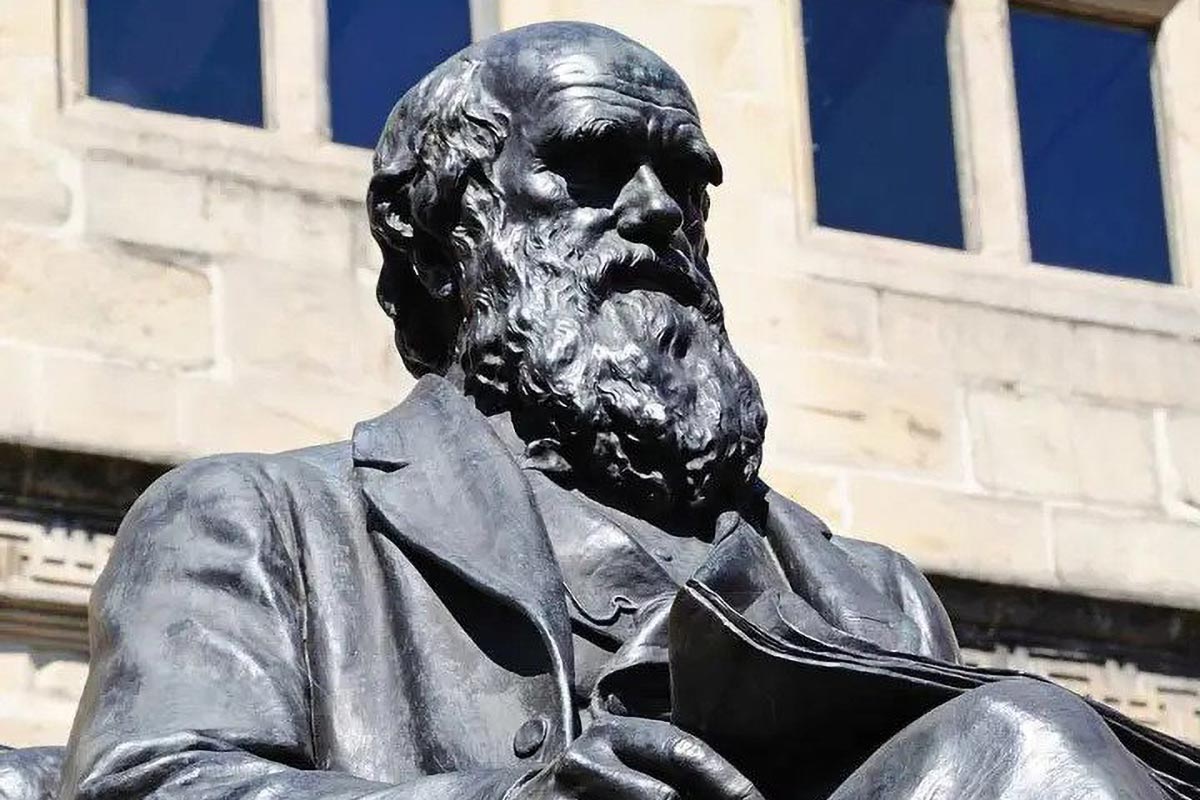 If you’re an adventurer then visiting a town isn’t enough. You’re looking for something cool and unusual, that you don’t find in the guidebook. And some of the most interesting places many locals have never heard about. So we’ve made this guide to help you find unusual things to do in Shrewsbury, so you don’t have to rely on chance alone.

Interactive Map of Cool and Unusual Things to do in Shrewsbury

Below you’ll find an interactive Map of Shrewsbury. By clicking on the numbered points you can easily set your route to match the narrative below.

We start this journey at St. Mary’s Church. Here you’ll find a plaque to the right side of the door with reference to a young 18th-century steeplejack and rope slider named Robert Cadman.

Cadman seemed natural in the air with a sense of balance and sure-footedness. It’s likely his actions induced fear in the mere mortals as they nervously watched him from below. But for Robert Cadman, this was nothing out of the ordinary.

For many years Cadman had been performing tightrope-walking tricks, not just in Shrewsbury but also in Lincoln and Dover. One of his most famous performances was to walk up an anchoring rope across the River Severn. His journey would take him from Gay Meadow (to the left of the English Bridge as you are heading out of town) up to St. Mary’s Church spire.

Remember this was nearly 300 years ago, and no safety equipment existed back then. So one fateful day back in February 1739 an official recommended to Cadman that one of the ropes was too slack. In reality, the extra tension caused the rope to break mid-performance. Cadman plunged to his death; his wife, collecting money, watching on in horror. 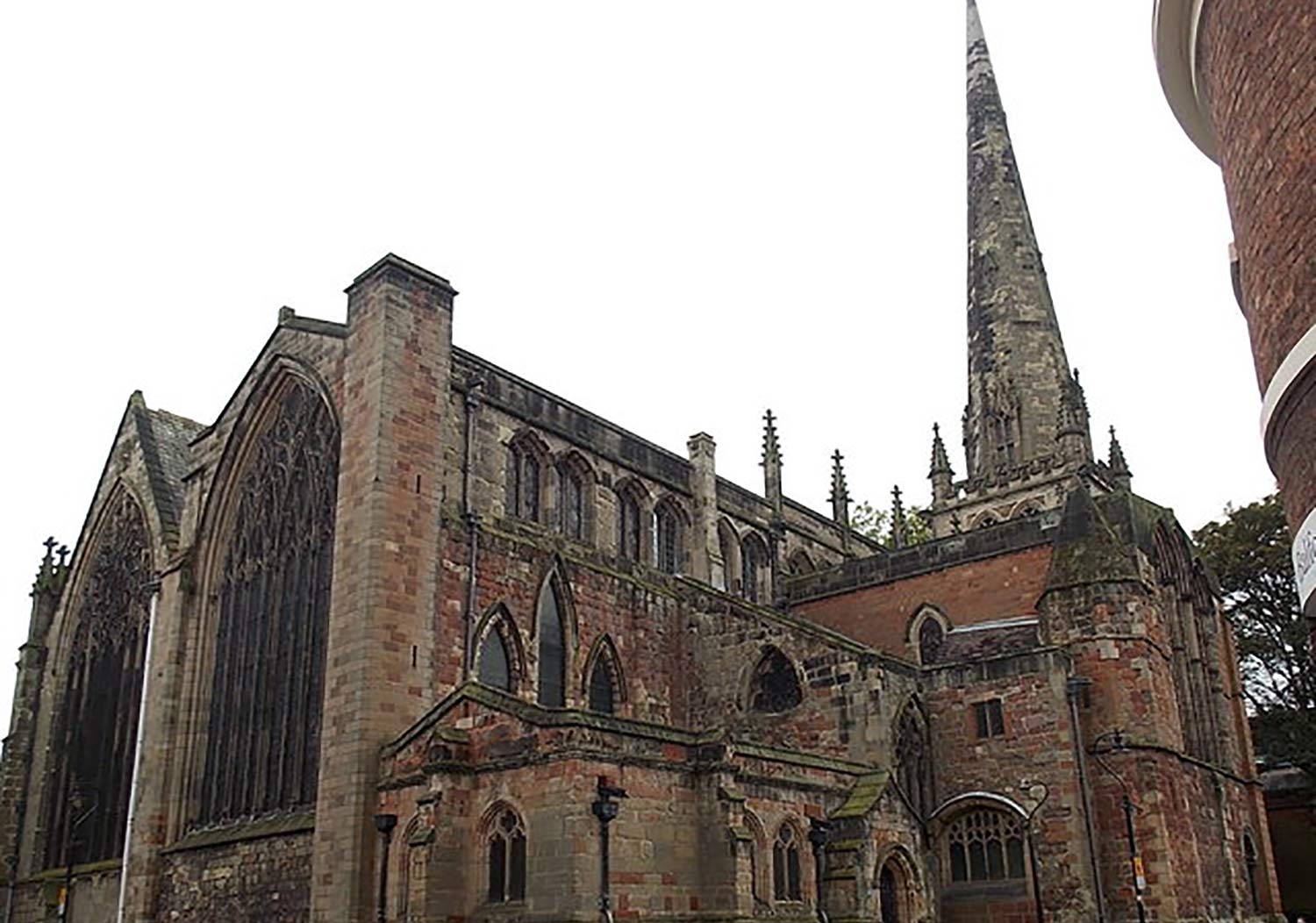 “St Mary’s Church, Shrewsbury, Shropshire” by Jaggery is licensed under CC BY 2.0

We know Charles Dickens spent quite a bit of time in Shrewsbury. Dickens was especially fond of the Lion Hotel; down on the Wyle Cop that you’d pass as you enter Shrewsbury via the English Bridge. So it is no surprise that the sights and sounds of Shrewsbury influenced his novels.

It’s for that very reason filmmakers used Shrewsbury as the setting for one of his most popular books, A Christmas Carol. Released in 1984, way before the Jim Henson’s puppet workshop got their fluffy mitts on the story.

But what’s really cool is that after the filming of the movie, the prop team left the grave of Ebenezer Scrooge in St. Chad’s Church cemetery. Shrewsbury is a photogenic town. But this is one photo opportunity you don’t want to miss on your tour of unusual things to do in Shrewsbury. 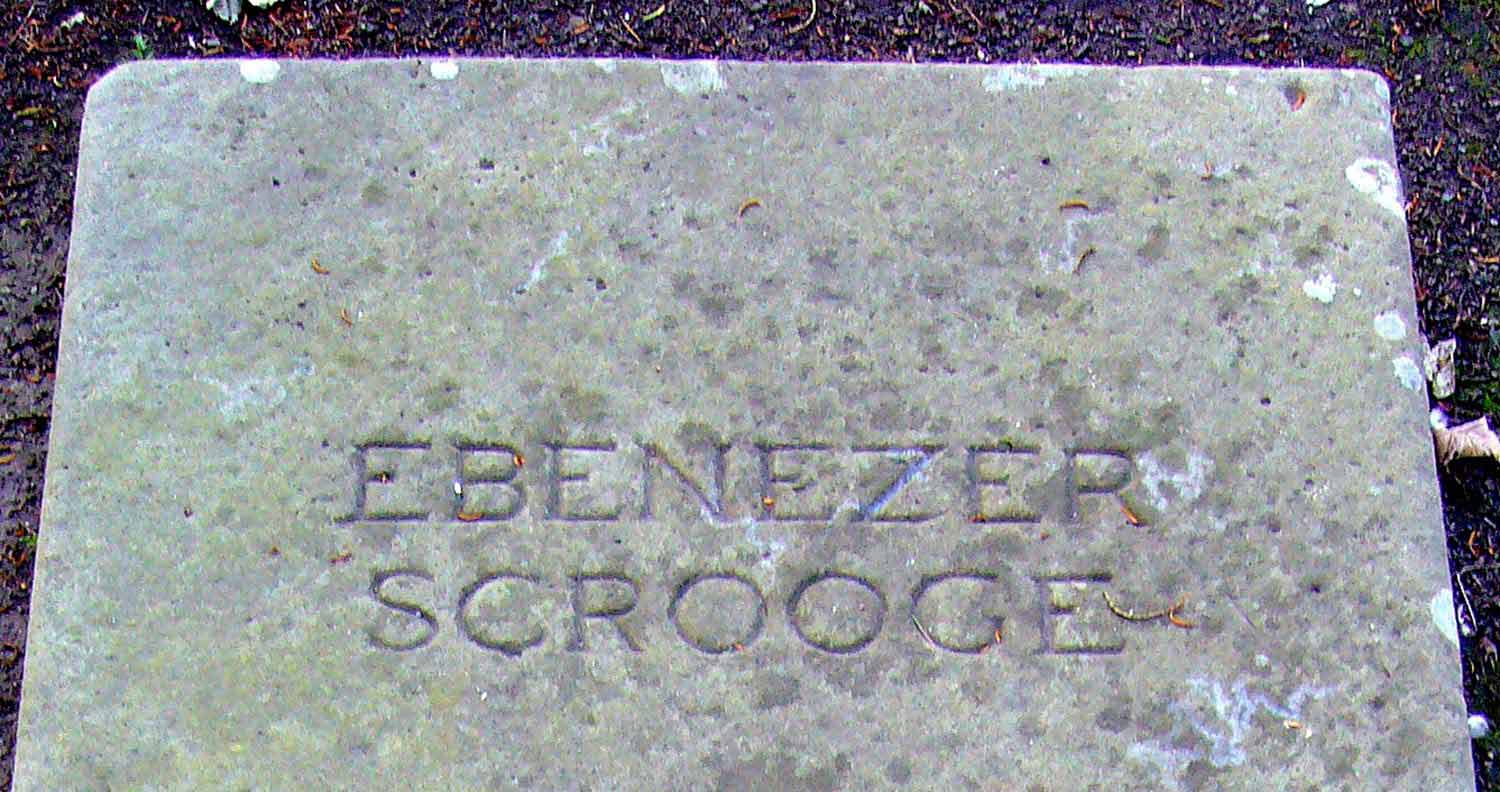 “Ebenezer Scrooge Grave” by Photo by Tom Oates, 2008 is licensed under CC BY 3.0

As with any old town, you might be dazzled by the number of historic buildings you pass. But some have hidden depths to be explored.

You can find one of those best-kept secrets can inside the Old Market Hall (OMH) in the Square. It’s an Elizabethan building, possibly one of the first prefab buildings in existence, built in just three months. But what’s inside is what makes the OMH so special. A bustling café and cinema right in the centre of town, showcasing the best independent films. Special mention goes to the carnival events, such as the annual Rainbow Film Festival.

The Old Market Hall holds a further treat inside, and it’s not their great selection of drinks and snacks. At the back right of the building, you’ll find an open and working clock mechanism that drives the hall clock using a series of pulleys. It’s really quite special. 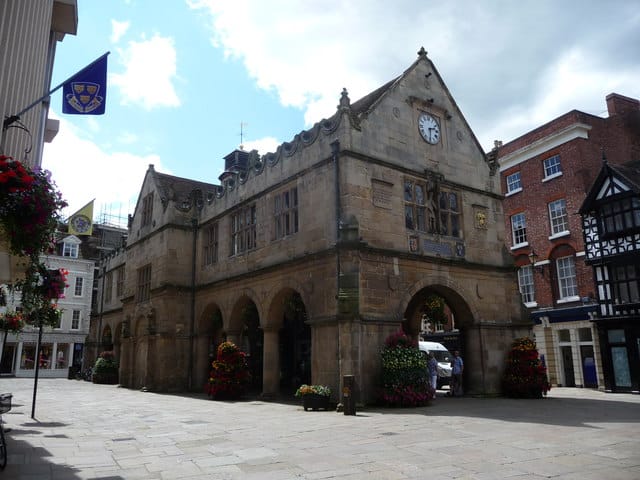 ‘Old Market Hall Shrewsbury” by Sam is licensed under CC BY 2.0

The Bellstone may be on the Darwin Trail, but it deserves a special mention.

When he was a young lad, Charles Darwin was introduced to geology through the Bellstone. It seems strange to him that a granite boulder of this size could be found outside of the Morris Hall courtyard. This puzzled Darwin because as a child he was told that this kind of stone came from Cumbria and Scotland. It wasn’t until he reached university did Darwin begin to join up the pieces. Discovering that during the last ice age glaciers would transport huge rocks around the country. 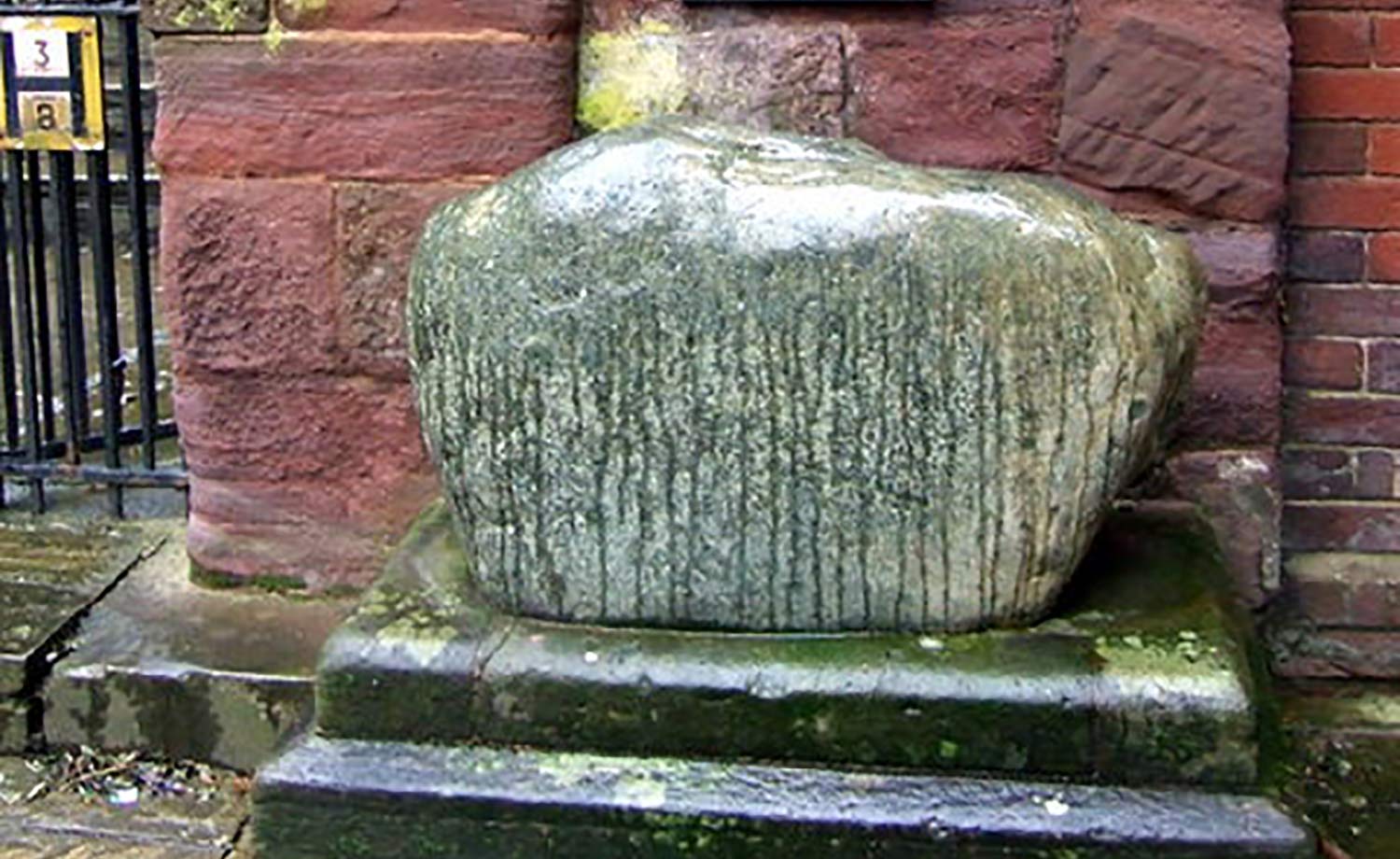 “The Bellstone at Morris Hall” by Ceridwen is licensed under CC BY 2.0

So it’s said that the people of Shrewsbury were horrified when in the 16th-century lightning struck the spire of St. Alkmund’s Church. The damage was severe and left the mark of the devil’s claw on the side of the bell. To this day there is talk of the devil sitting on his spire, looking to his chair at the Stiperstones. It’s said if anyone is sitting on Devil’s Chair Rock then the Devil will send terrible storms to chase them away.

Did you see the scars in the bell?

6. The Oldest Pub in Town

Refreshments are always welcome when you’re exploring a new town. Loggerheads is your destination. It is certainly up there with the most usual things to do in Shrewsbury. Drinking here is like being transported back to the 1600s, with modest wood furniture, loads of tiny rooms and a distinct lack of hipster fashion. There are even signs saying ‘no women allowed’, harking back to a best-forgotten bygone era. Loggerheads is the real deal though. If you’re lucky you’ll see singing groups, jazz performers and poets performing in the snug too.

To your right, you’ll see the best-preserved section of the old town wall, situated behind the tennis greens. King Henry III constructed the wall in the 13th century following the sacking of Shrewsbury by the Welsh; a rebellion led by Richard the Marshal in alliance with Prince Llewellyn. 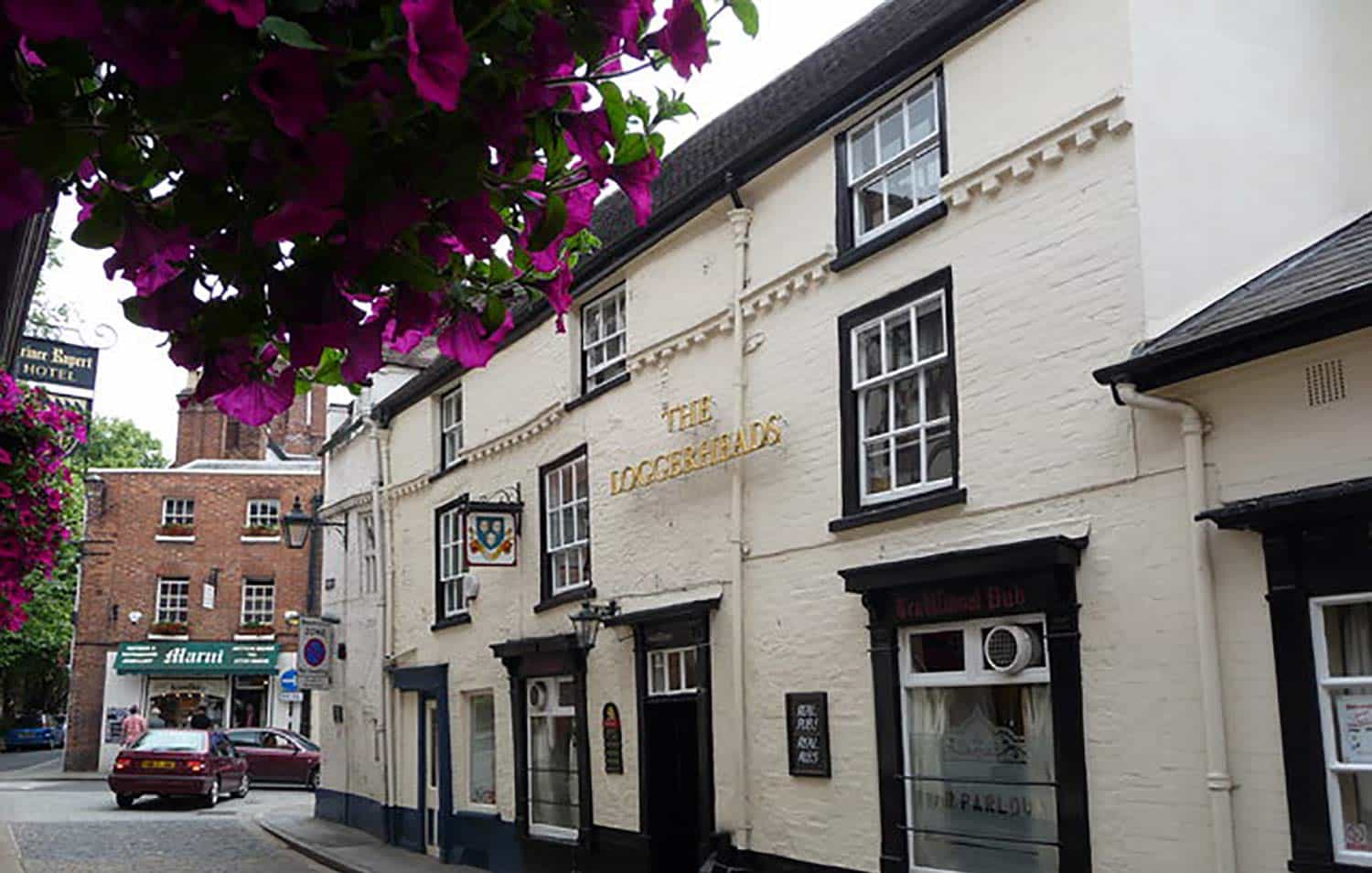 “The Loggerheads Pub, Shrewsbury” by Jeremy Bolwell is licensed under CC BY 2.0

In times gone by it was not uncommon to name a street or road by its function. It’s not hard to imagine what kind of economic activity this lane saw back in the Middle Ages. The now called Grope Lane in Shrewsbury is the last town in the UK to retain such a name. Up from Grope Lane is the Bear Steps and then two Churches.

Don’t you find it interesting how close prostitutes were working to the places of worship? The Churches certainly had influence back then. It makes you wonder if they recognised the need for such activity and the economic benefit it brought to the slums.

If you head up Grope Lane don’t forget to visit some of the shops. You’ll even find the UK’s only Harry Potter store, Labyrinth, which is well worth a visit, even if you’re not a fan. 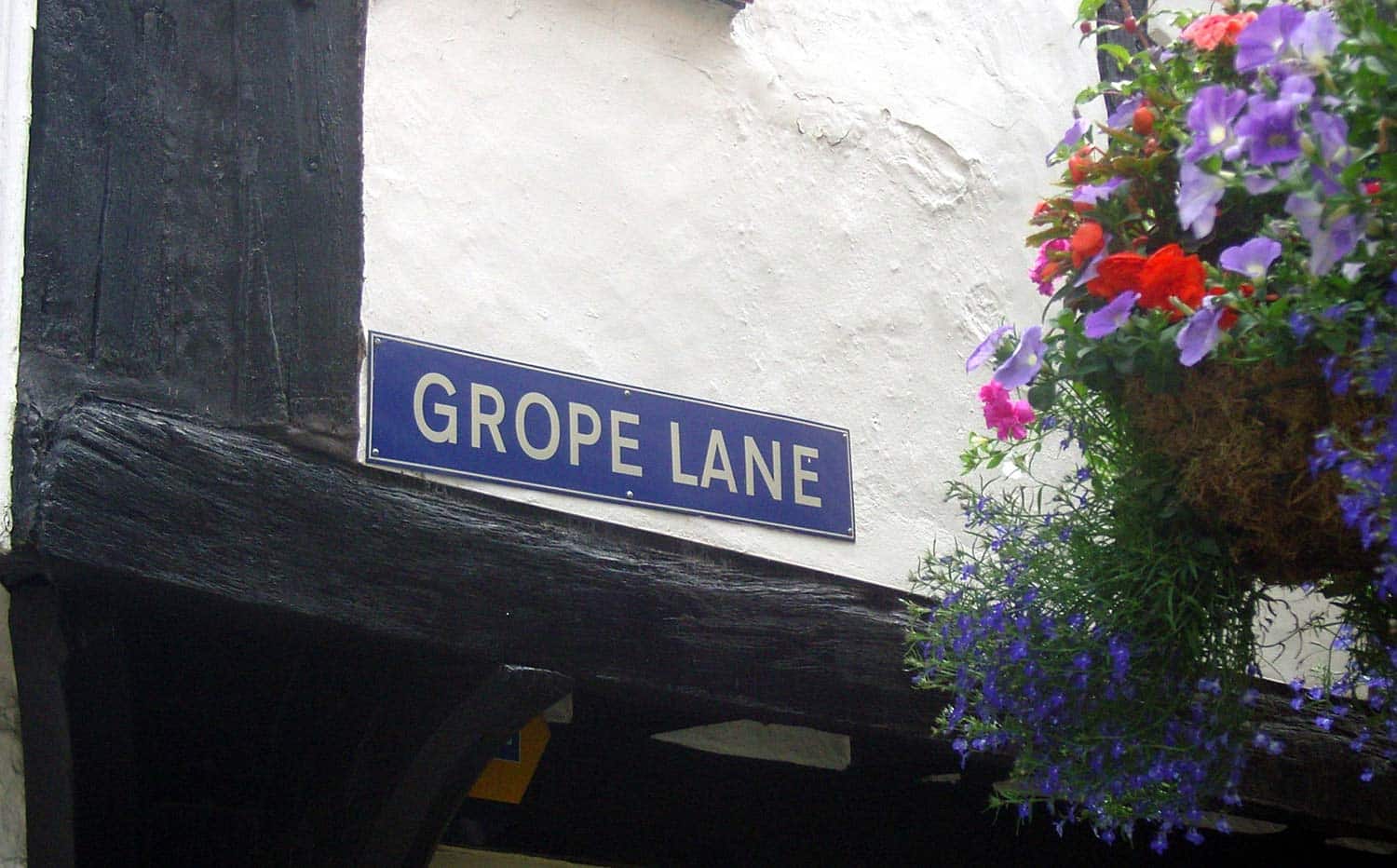 “Grope Lane, Shrewsbury” by Ronald Turner is licensed under CC BY 2.0

8. View from a Different Perspective

Shrewsbury is pretty lucky to have the River Severn loop right through the town. That’s why the Sabrina Boat is one of the most popular things to do in Shrewsbury.

Discovering a town by boat brings a whole new perspective to your exploration. There are multiple trips per day, each lasting around 40 minutes. Sit back, enjoy a drink, and take in the sights and sounds along with enjoyable commentary from our staff. If you want something a little racier, then our Ghost Tours or Themed Nights might be more up your street. 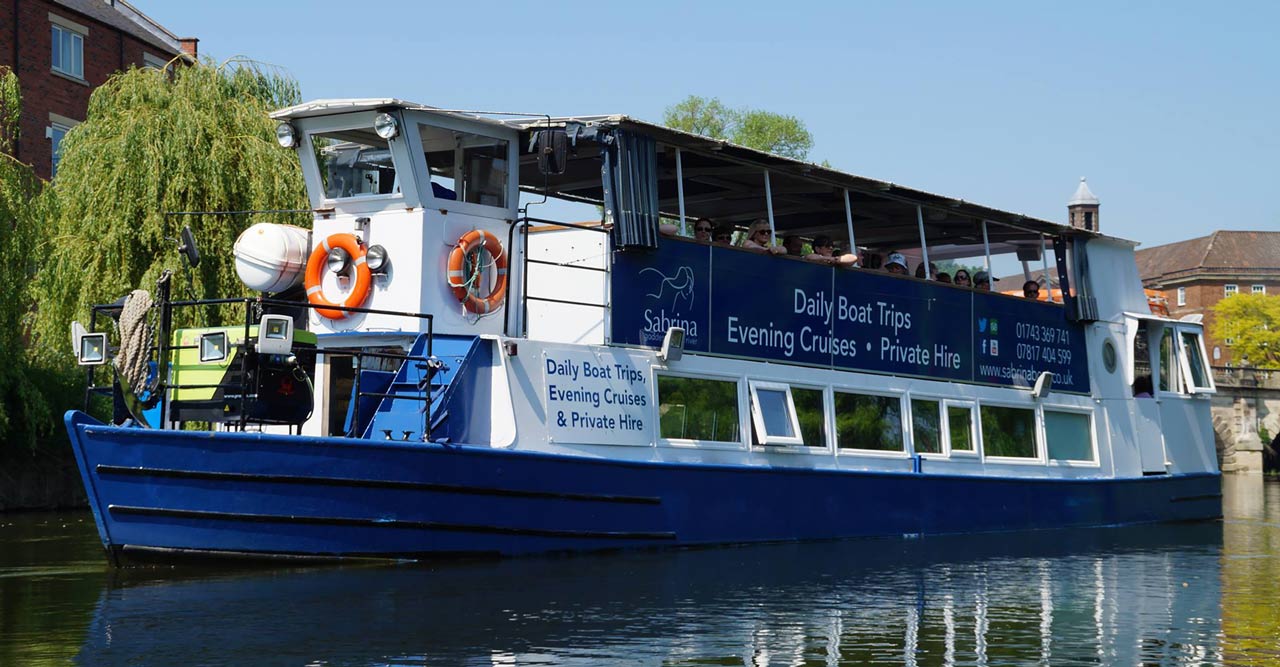 Another of the most unusual things to do in Shrewsbury is to visit the Dana Jail. What’s left of the original Georgian building is the gatehouse, built by Thomas Telford in 1793. The present building was constructed in 1877. After 200 years, this former prison is now an extremely popular tourist attraction. Steeped in history, darkness and despair, you won’t be disappointed by your visit.

Run by ex-prison officers, your tour will begin with you ‘stating your sentence’. You’ll then embark on a journey behind closed doors; learning about the grizzly history of the Dana Jail. It’s cold and it’s spooky; making a trip a perfect way to round off your tour of unusual places to visit in Shrewsbury. 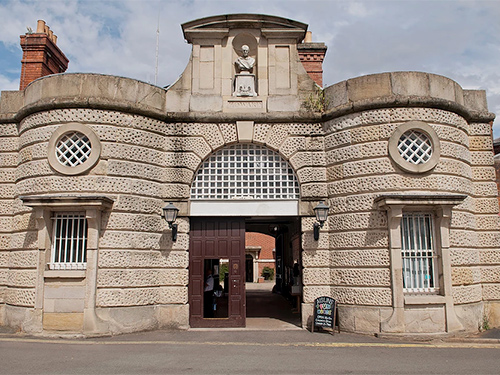