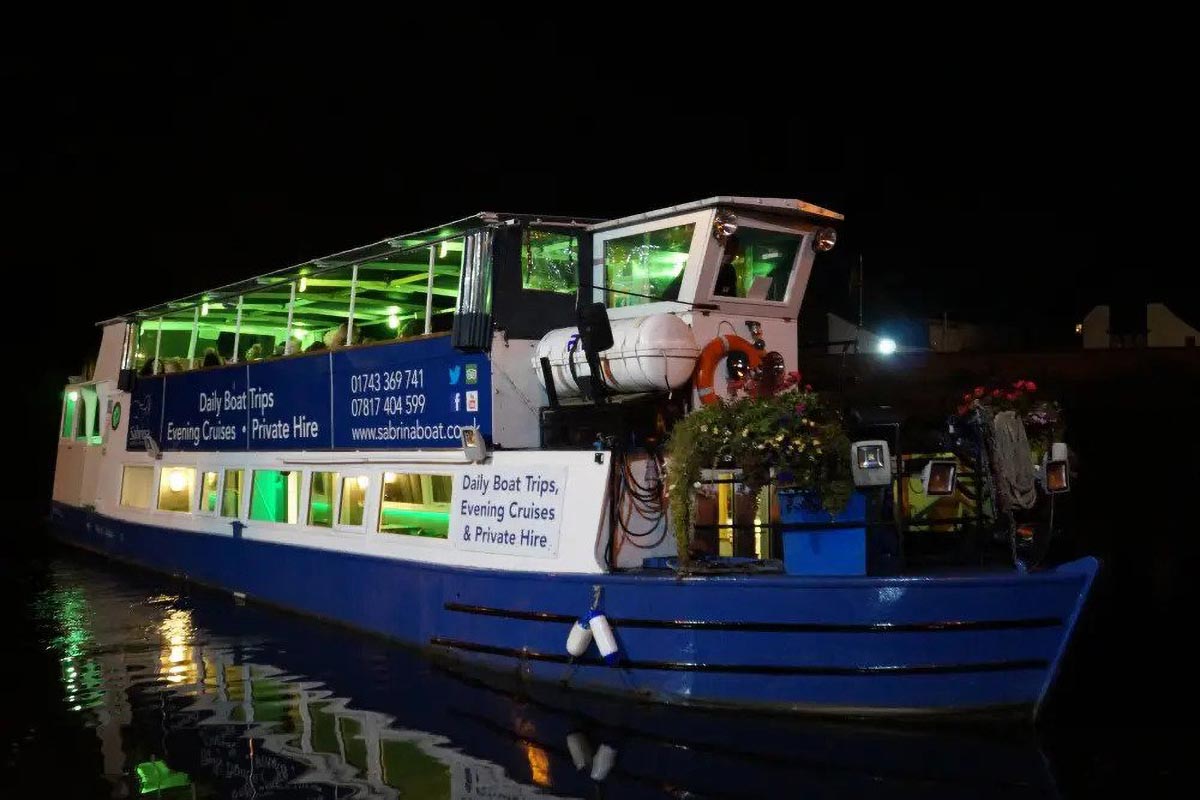 Shrewsbury is an ancient town and one that has endured centuries of bloody wars, treachery and cold-blooded murder. So it’s no surprise that there are so many things to do in Shrewsbury related to the spookier side of life and the town is considered one of the most haunted regions in the UK. Shrewsbury ghosts and their toe-curling stories can be found everywhere, and so we created this Shrewsbury Ghost Walk so you can experience the spooky side of town at your own pace.

Also, don’t forget every throughout October we run an extremely popular Ghost Tour by Boat; departing from Victoria Quays by the Welsh Bridge at 7pm & 8pm. Book early to avoid disappointment.

Below you’ll find an interactive Ghost Walk Map of Shrewsbury. By clicking on the numbered points you can easily set your route to match the narrative below.

We begin our journey of Shrewsbury Ghosts at Princess Street (formerly known as Candle Lane). It’s here that pilgrims would make their way to the old St. Chad’s Church carrying lit candles to make their vigil. It’s no coincidence that this street has seen its fair share of tragedy. One such horror occurred at the current Pengwern book site, 23 Princess Street. In the 1500s a fire broke out, killing five children upstairs and their mother downstairs. To this day shop workers occasionally smell burning and the soft sound of children’s voices playing upstairs.

It’s possible darker forces are at work, in this same building. A hanging maid is often seen and even more surreal, visitors have been struck by a maleficent force. Some say this is the poltergeist of Elizabeth Bickerstaff; murdered in August 1551 by a family member, her body chopped up and buried in the garden. Imagine his horror when the landlord’s dog dug her remains up just a few years later.

Next, on our Shrewsbury ghost walk, we visit Milk Street, just off the high street where you’ll find the entrance to the Old Post Office Inn, also known these days as the OPO. The surrounding buildings here date around the mid-1400s. The name ‘post office’ doesn’t refer to the modern-day version of the word. It reflects the old use of the word post, which means a stagecoach stop.

Imagine back then the town was heaving with horses and so with it the stench of manure. To ward off the bad smells women would often sell ‘nosegays’ made from lavender. The pungent smell of one of those ‘lavender ladies’ is still there, accompanied by a less than pleasant horse dung odour. 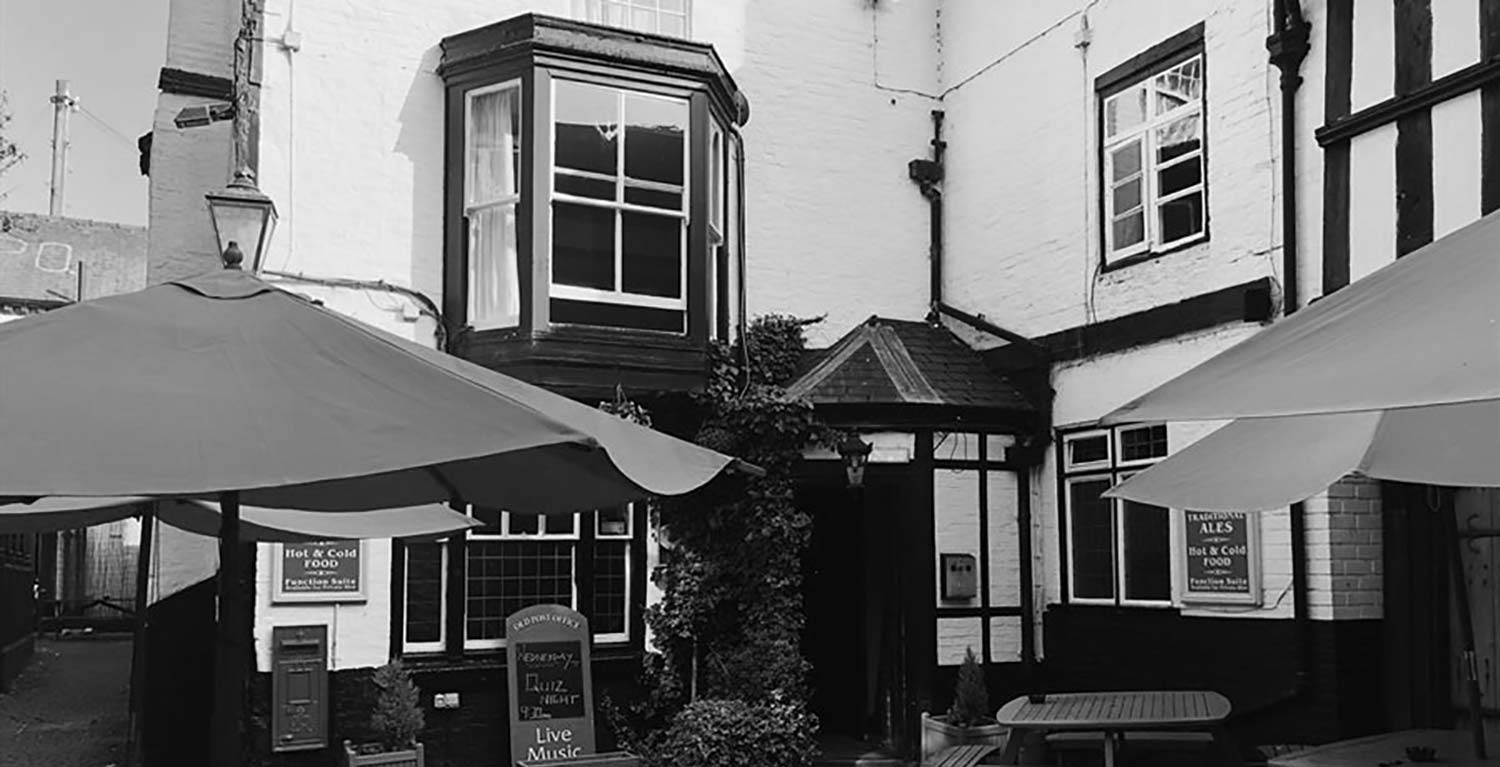 In the cellar just below your feet laid the body of a murdered cellar girl. One such visitor to the OPO inn was young shop trainee. He was a messy sort, but every morning he would find his strewn clothing neatly piled up and his bedsheets tucked in. When his training was complete, upon leaving the inn, the man thanked the Innkeeper’s wife. Praising her hospitality for making him feel at home; tidying his mess and tucking him. With a slight tremble in her voice, she stated that she’d never ever been in his room.

Could it be that Shrewsbury ghosts can be helpful as they can be mischievous?

Leaving the yard and turning left, you’ll eventually reach 4A Milk Street. The shop once belonged to Mr and Mrs Davies, milk workers whose son’s Bryn and Daniel were abducted, locked in a room and starved to death. It is said that all four family members cannot rest, still searching for each other as they haunt this property. 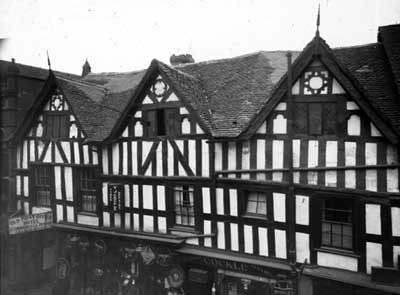 Our next stop is on Wyle Cop, a famous coaching house called The Lion Hotel. It was the place to stay, providing accommodation for celebrities such as Dickens, Disraeli and Madame Tussaud. Here the spectral figure of a lady in grey is often cited, her ghostly figure standing at the bottom of the stairway outside of the Adam Ballroom. Some say she is waiting here for her man to propose, only he never came. Walk up the narrow entrance to the present-day car park by the side of the hotel you’ll see a window, and above that the remains of an old archway. This is where the grey lady leaves the hotel, only to disappear halfway across the road. 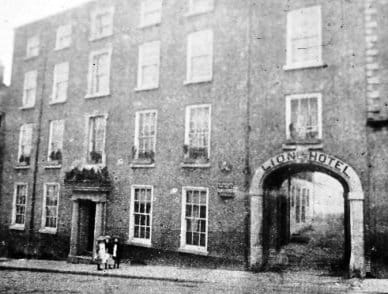 7. The Bodyguards of Bosworth Field

Further down the road, you’ll find Henry Tudor House; go stand in the Barracks Passage. Here Henry Tudor (later King Henry VII) lodged with his bodyguards before the Battle of Bosworth Field in 1485. Returning soldiers can still be seen today heading back to the inn. It’s a place where they enjoyed better times, some with their faces pressed against the window, looking in. 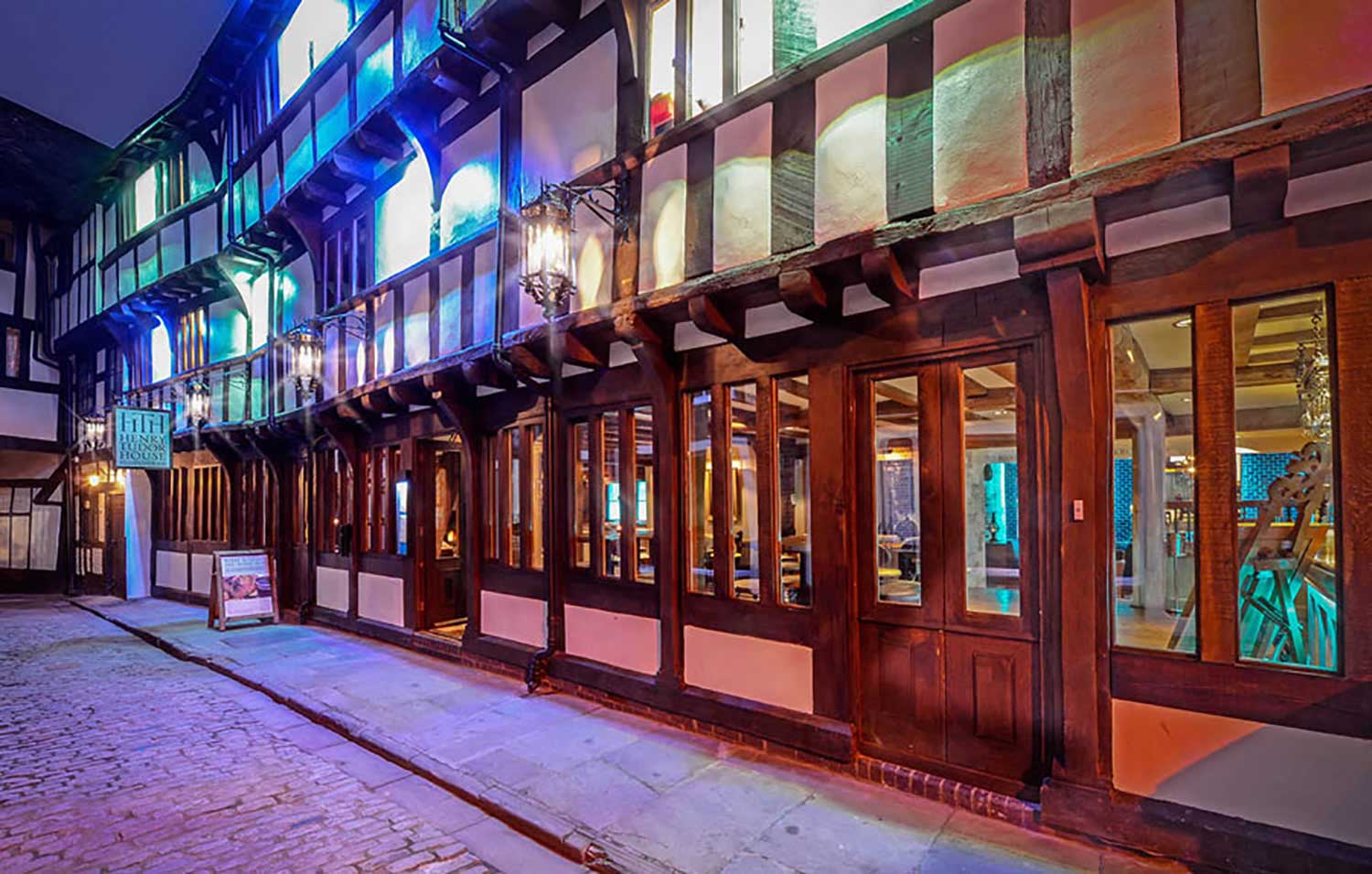 Turn around and face the buildings opposite Henry Tudor House. Here an incident of dark nature took place, about midway between the two sets of steps. We don’t know exactly what, but it is said when a hawk is spotted in this very area evil lurks close behind. People speak of a wraith, a sign of death; female in form. Her cowl was devoid of eyes and a body that moves with the wind, and with that sending trembling shivers down your spine. If you do see such a site, we suggest you leave very quickly indeed.

Head back down to the Wyle Cop, just down the road is the Nag’s Head. Built-in the 1300s it’s one of the most haunted buildings in the town and full of Shrewsbury ghosts. If you look up you’ll see a top window; that room is sealed. There have been three suicides in the room and each person is said to be of happy mind.

So what is in that room I hear you say? A painting.

It is said that those who spend the night in the room are consumed with darkness and despair.

The first victim, a coachman was found hanging from the rafters.

The second, a newly-wed bride who flung herself from the window, crashing to the street to the horror of the passer-by.

The final victim, a young soldier who had just returned from the trenches of WW1 shot himself in the wee hours. This is eerie part of town indeed.

Heading back up the Wyle Cop, we continue our Shrewsbury ghost walk by turning onto Fish Street where you’ll see St. Alkmund’s, built in the fifteenth century. It’s here that a steeplejack, George Arthur who had a hand in the construction of the building took on a drunken wager to climb the spire. Being a greedy man, he enjoyed winning a bet, climbing the spire four times. On his fourth he lost his foothold and he plummeted to his death.

Numerous accounts have been told of a ghostly shadow climbing the spire in the early hours of the morning.

Just behind St. Alkmund’s is St. Julian’s Church, and in their graveyard lies a disturbing story. A lonesome man, an out of town sort residing at the Lion Hotel, found stone-cold the following morning in his bed by the maid. Some say he was poisoned by the local innkeeper for failing to pay his dues. Locals used what money they found in his pocket to pay for his burial and the very next day they lowered the poor soul into the ground. That night, a passer-by heard the sound of scraping near where the man had been buried.

When the gravediggers exhumed the body, scratch marks were present inside the coffin. On the most silent of nights you can still hear terrible groaning noises from the graveyard.

“Churchyard at St. Julians, Shrewsbury” by Panyd is licensed under CC BY 4.0

As you head back towards the main shopping street, Pride Hill you’ll pass Butcher Row. On the corner of this street is the Prince Rupert Hotel. Built in the thirteenth century it is most certainly haunted by many Shrewsbury ghosts. The most sighted is of a royalist general whose fiancé ran off with one of his lieutenants. Those staying in the hotel speak of an older gentleman who walks down the corridors at night opening doors, searching for his lover.

During the 1984 filming of ‘A Christmas Carol’ the producer staying at that very hotel passed an old man holding a candle as he walked to his room. When he noticed the candle cast no shadow the producer swiftly spent the rest of the night in the bar. 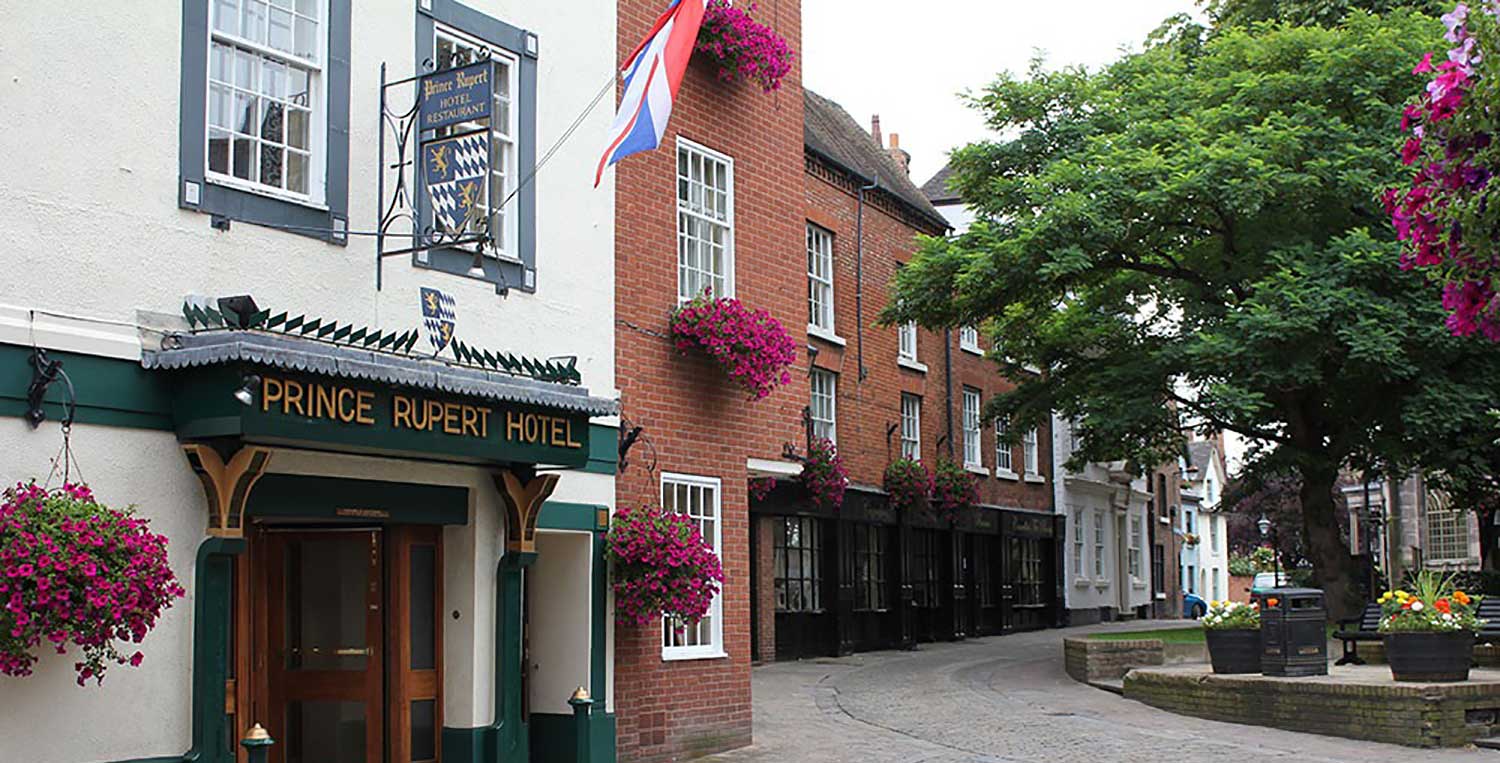 From the Prince Rupert Hotel trace your steps back towards St. Julian’s, onto Church Street, at the end take a left onto Dogpole and a right onto St. Mary’s Place. At the end of this road you’ll find the Parade Centre, it’s now a shopping centre. Back in the early 19th Century this magnificent building was the Royal Salop Infirmary that closed in 1977. There are two notable ghosts; a matron, a known poltergeist that throws everything on the floor at night, and a more sinister White Lady. The White Lady haunts where the operating theatres used to be. Many see her as a death watchman, signifying when people are going to pass over. 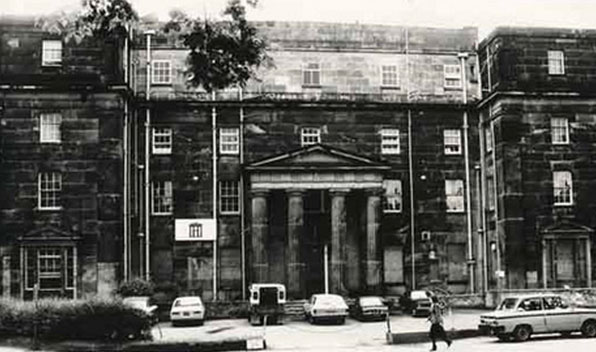 The second to last stop on our ghost walk through Shrewsbury is Little Shut. It’s a tiny passageway that leads onto Castle Street, near where you’ll find M&S. This alleyway gives you an idea of what it felt like in old Shrewsbury. Nothing spooky has been recorded here but at night, in the dark, it certainly gives you a feel for the sinister side of this town. And that leads us to our last stop, St. Nicholas Church, and the most gruesome of all the tales to be told.

St. Nick’s found opposite the library, it was built around 1067, a time when the Norman’s first came to Shrewsbury. It’s also the place where the most famous of all Shrewsbury ghosts appears, knocking on the door and demanding entry. His name: Bouldy Jack (Bloody Jack).

What we know about Jack is he was seen dragging a girl called Fanny by the hair towards the Castle. Although Fanny was saved from a gruesome end by the town’s folk, it raised suspicion. They raided Bouldy Jack’s home and found eight sets of fingers and toes in a box.

Jack was put on trial. Here the true nature of Jack’s work became apparent. After severing the girl’s appendages, Jack would then send his victims to the underbelly of the town to be raped and murdered. Victim’s bodies would be disposed of in the River Severn.

Jack was hung, drawn and quartered before his head was stuck on a pike at the top of the Cop.

Every Monday Night in October, 7PM

We hope you enjoyed our guide to the ghouls and ghosts of Shrewsbury, if you did then you’ll love our ghost cruise. We’ll take you on an atmospheric journey down the River Severn where your guide will thrill you with the spooky tales and stories of a bygone Shrewsbury.