Home/Posts/Shrewsbury Walks – A Meander around the River Severn

Shrewsbury Walks – A Meander around the River Severn

Some of the simplest things in life are the best, and to be one with nature surely falls into that category. Shrewsbury’s River Severn offers a unique space to feel a real connection with nature. Her tranquillity beckons us to ease back and take in a moment’s clarity from the rat race. It’s no wonder Charles Darwin was influenced so much by his surroundings as a child. Then there are times of juxtaposition, where ferocious currents carve the landscape and restore the balance, representing the turbulence of life with paths still yet unknown. That’s why we think ambling down the River Severn is possibly the best of all the Shropshire walks.

For those unfamiliar with Shrewsbury’s River Severn map then this guided walk is the perfect way to stimulate the senses and discover a town from times gone by. We’ll explore the medieval section of Shrewsbury along the Severn Way, a footpath that follows the longest river in the UK from its source in Plynlimon to its estuary in the Bristol Channel.

Some Shropshire walks are about pushing the boundaries of limits and others are about just getting out into green spaces, this walk is different. As you pass through Shrewsbury we suggest a mindful amble. Concentrate on your breathing as you experience the scenery changing as you pass on by, gently bringing to your attention the buildings and notable features. This allows you to ponder on the history and geography of the area, letting in new ideas and thoughts and forgetting about the daily grind.

To make things even easier, we’ve included an interactive guide below. Just click on the points to visit the next destination.

The walk begins at Shrewsbury Castle. This site has always been important to the town. Chosen for its position close to the narrow neck of the meander, it’s ideally placed to protect the town from the hoards of invaders from Wales or rebels from England. So as you can imagine, Shrewsbury Castle has seen many bloody battles.

To really get an understanding of why Shrewsbury Castle was such an important strategic site climb up the motte to Laura’s Tower. Take your time to consider each step in turn before you reach the top. Here you’ll see both sides of the river and the town on a rocky hill in the middle of the river loop. 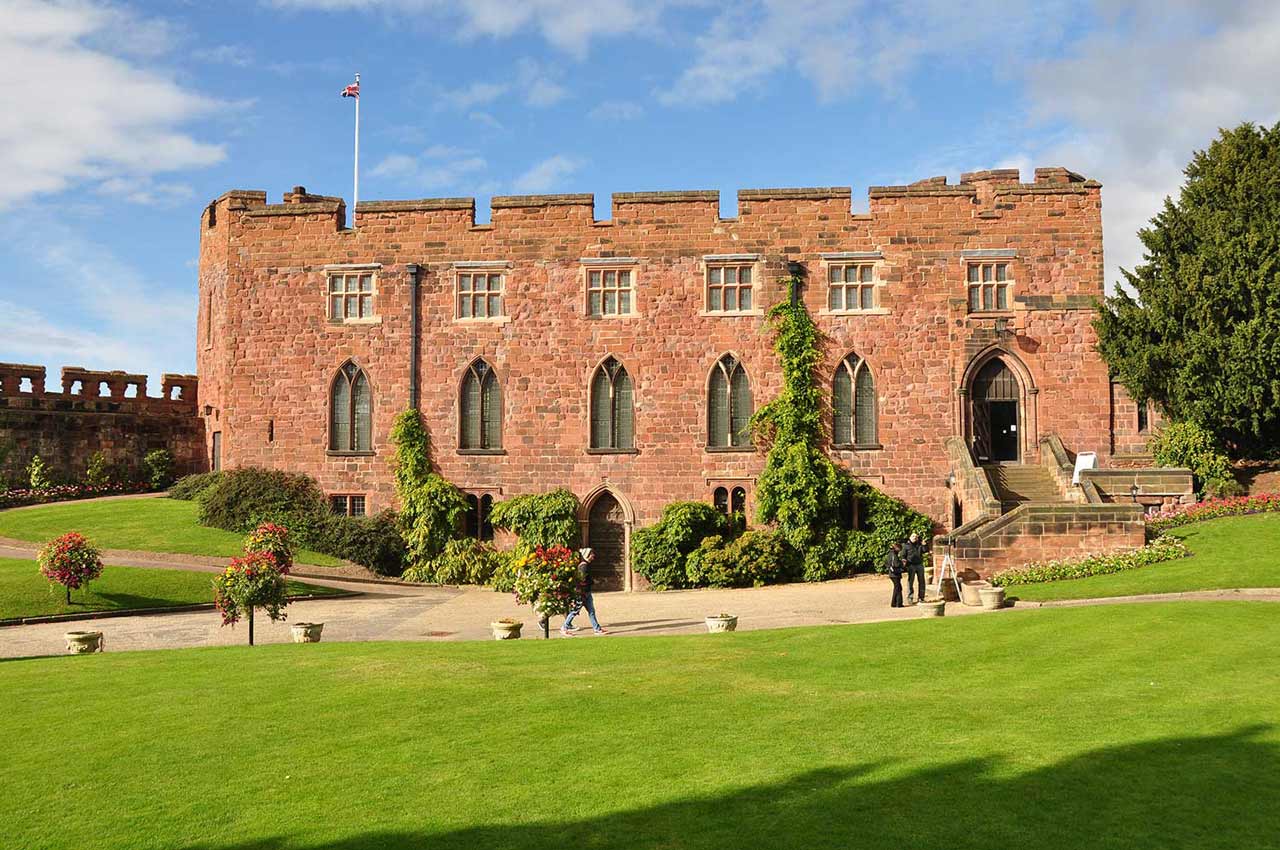 This steep embankment leads you down to the River Severn. At the bottom is the only surviving town gate, which dates back to the 1200s. For centuries it would have been one of the most important areas along Shrewsbury’s River Severn, especially as the town became a successful merchant hub for England.

Before you set off upstream (turning right) notice the grandeur of the railway bridge. The stone bridge you can see was built in 1849 and later encased in metal extensions to accommodate the increase in railway demand.

Turning right as if to head upstream you’ll notice the spire of St. Mary’s Church, said to be the third highest in England. Back in the early 1800’s Shrewsbury’s celebrated daredevil and steeplejack Robert Cadman would woo crowds by performing feats of bravery. One such act was to traverse along a rope, connected at one end to the spire and tethered to the ground over the river. He’d performed stunts like this in the past but in 1739 something went terribly wrong.

If you’re looking for things to do in Shrewsbury, we recommend a visit to St. Mary’s Church. There you’ll find a plaque that explains the whole gruesome story.

As you continue your journey, you’ll reach the English Bridge. At one time this bridge had huge archways to allow merchant ships to transport goods such as textiles between London and Ireland. Trains and then later trucks replaced the need for such elaborate designed bridges, so in 1920 the English Bridge was torn down and rebuilt with the reclaimed materials.

Take a look at the arches; note the carvings of Neptune, Sabrina the River Goddess and dolphins. It is said that when the water reaches the dolphin’s mouth, water will rise from the drains, flooding Abbey Foregate. 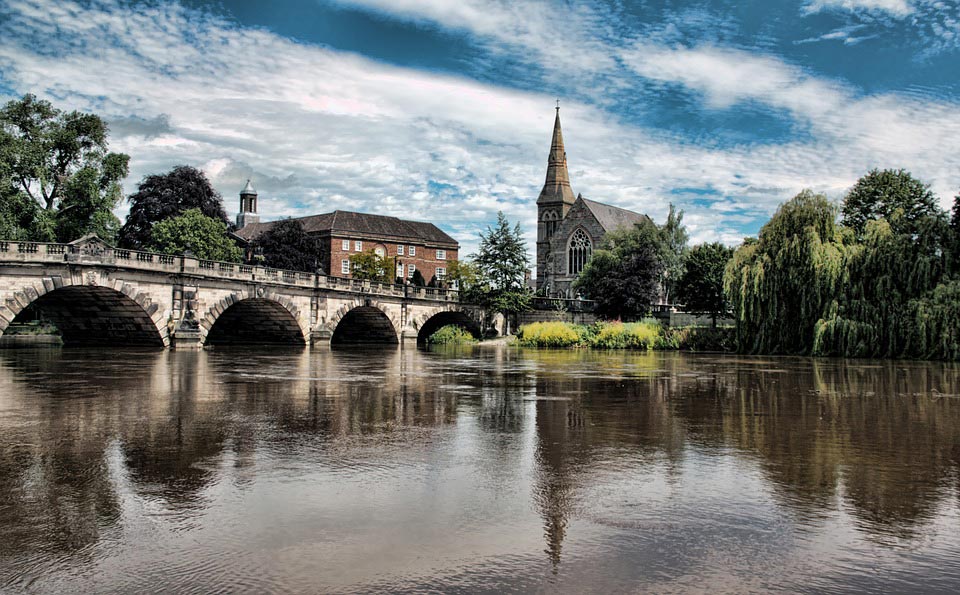 5. Views past the English Bridge

Once you’ve passed the bridge take a moment to look back across the river towards Coleham. It’s quite a beautiful viewing position and certainly worth taking it in for a moment.

As you continue onwards upstream towards Greyfriars footbridge you’ll see some houses to your right. These are the remnants of a Franciscan Friary; dating back to the 13th century. Due to the location, the Friary was prone to flooding and when voluntarily dissolved in 1538 it presented few valuables to the townsfolk, bar the Jesse window now situated at St. Mary’s Church.

As you can tell from the name, The Quarry Park was once the main source of stone used in the buildings around Shrewsbury, it also served as arable land and for livestock grazing. It wasn’t until around the Victorian era that the park began to take shape in the way we know it now.

It seems fitting that of all the Shropshire walks, the place where nature and man meet equilibrium is Shrewsbury’s The Quarry Park.

Though artificially planted, the Lime Trees on the riverbank are home to many species’ of animals, while the river comes to life with the parades of swans, dive-bombing cormorants and the magnificent goosanders. Lush vegetation, dictated by the seasons, emanate with colour and aroma, from yellow flags, meadowsweet, lady smock and purple loosestrife to name a few.

Flourishing in this ecosystem, damselflies and dragonflies skim across the water in an almost synchronous display of acrobatics. The River Severn in Shrewsbury is also the perfect habitat many species of fish; notice the steps leading down to the riverside where fishermen showcase their prowess in competition.

To your right, you’ll see the best-preserved section of the old town wall, situated behind the tennis greens. King Henry III constructed the wall in the 13th century following the sacking of Shrewsbury by the Welsh; a rebellion led by Richard the Marshal in alliance with Prince Llewellyn. 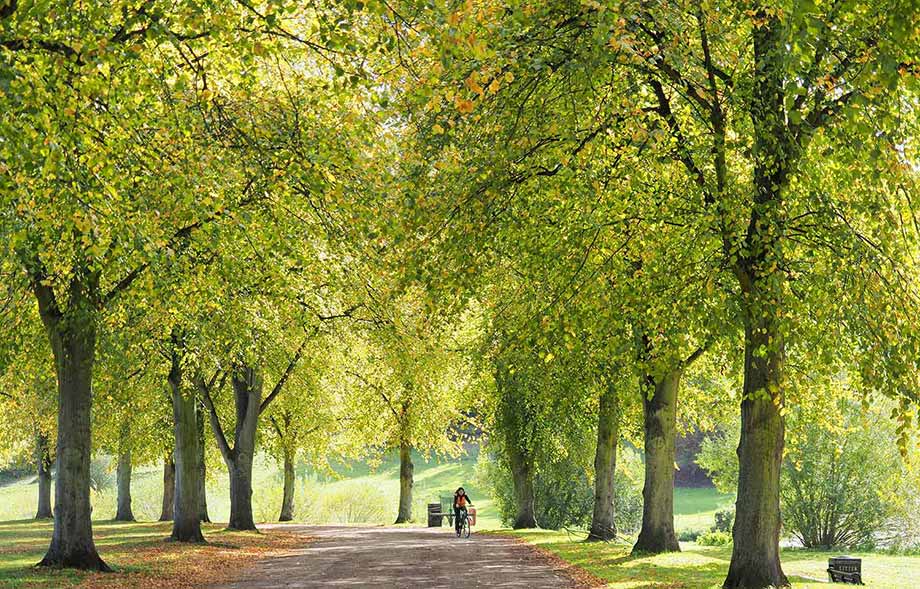 “Autumn Sun” by jimborobbo is licensed under CC BY 2.0

Here, by the statue, you’ll find an information board that gives more detail about the history of The Quarry and some of Shrewsbury’s cool and unusual stories of the past.

It’s at this point you can make a short trip up to The Dingle which is beautiful no matter what time of year it is. Inside you’ll find another status of Sabrina, the River Goddess and an excerpt from John Milton’s Comus. Take your time to appreciate a little piece of calm on this Shrewsbury river walk. 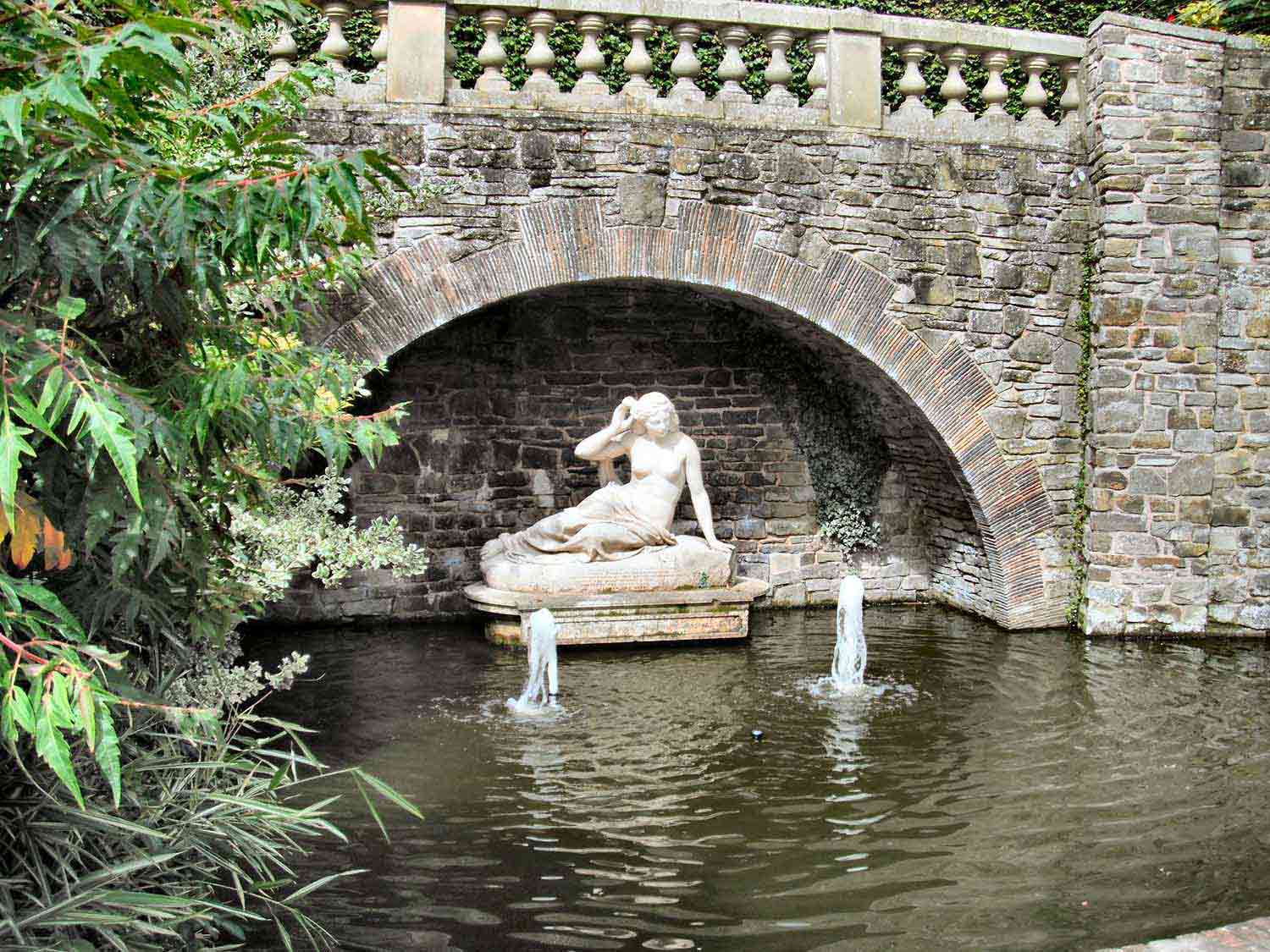 8. Information at the Playground

Take a look across the river, here you’ll see a great pub called The Boathouse. Once upon a time, this was home to a warehouse where merchants would store lead which had been extracted from the mines of Snailbeach near the Stiperstones.

“School Boathouse Shrewsbury” by Kevin Myers is licensed under CC BY 1.0

Home to our River Cruise boat, Sabrina this now eloquent looking quay, adorned with high-class bars and restaurants was the site of Shrewsbury’s cesspit. Either side of the river, tanners, skinners and abattoirs all threw their waste into the river. The stench would have been unbearable. So it makes sense that from 1705 drinking water was extracted downstream from this point, does it not? 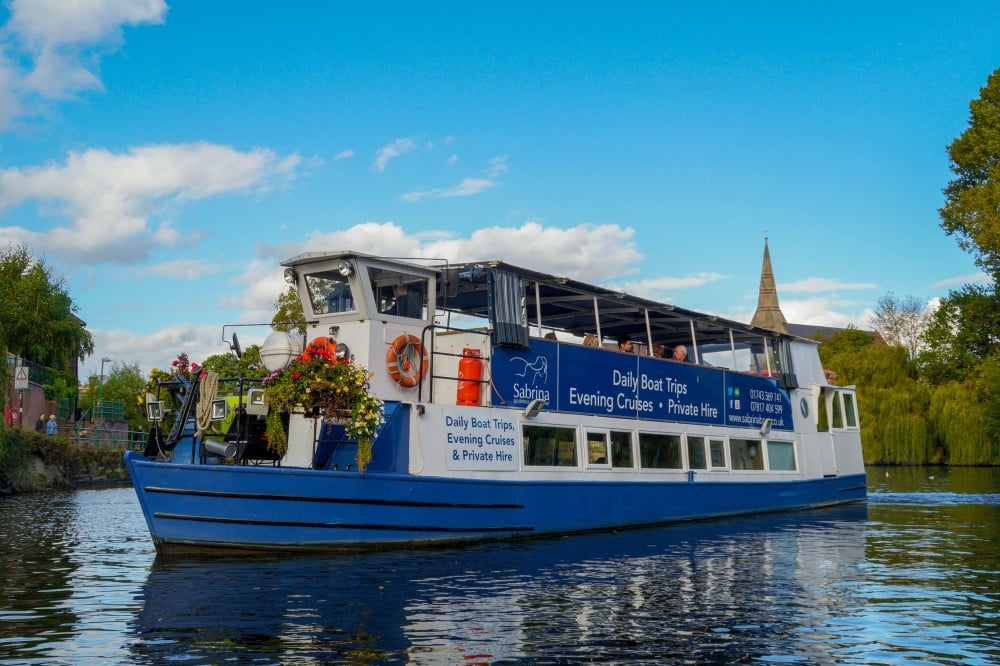 At this point, cross over the Welsh Bridge. Completed in 1795 to replace the medieval St. George’s Bridge, which was collapsing due to the intensity of flooding in the area. The new bridge didn’t fare too well either. By 1830 much of the riverbed had washed away and new large rubble stones were deposited to secure the foundations.

Take a close look at the parapet for the metal pulley bar once used for pulling barges into their moorings. 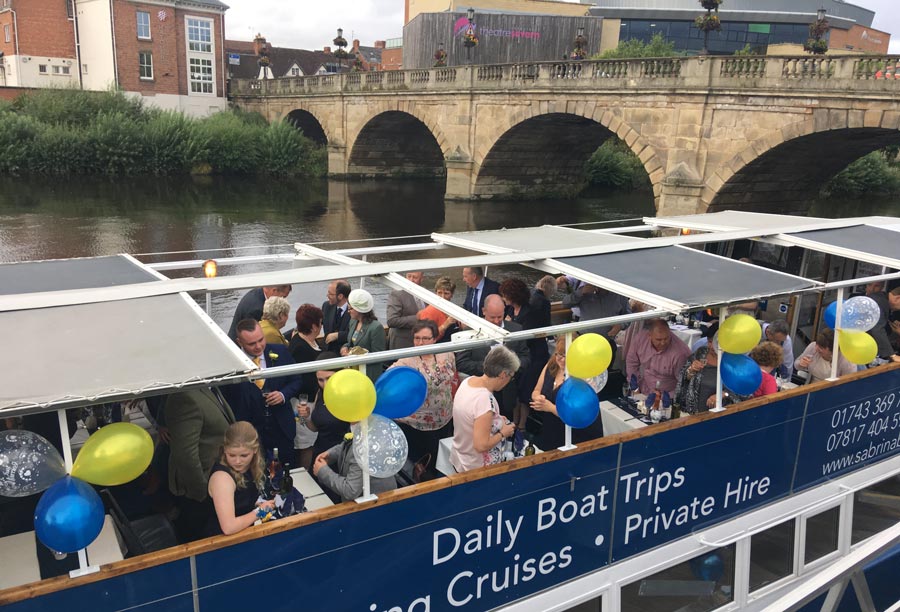 “The Welsh Bridge” by Bryan Clift is licensed under CC BY 2.0

As you pass over the Welsh Bridge, you’ll see a footpath that takes you down to the riverside, once at river level, turn left.

This area was once the old river port marks one of the most important places of any of the Shropshire Walks around Shrewsbury. Mardol (on the opposite bank) was built in 1607 and Frankwell (on your side of the river) was built in 1608.

Take a moment to consider what this place looked like by 1660, bustling wharfs lined with warehouses, pubs, weighing machines, and rope and sail makers to name a few. Market traders would be bartering with merchants to secure the best price for sought-after goods such as salt, timber, leather, lead, shop goods and luxury products.

Imagine how the Rivermen would have to travel upstream against the current; it required sheer brute force. This was the job of men called boat-hauliers; by 1809 they were replaced by horses that would drag the boats along the towpath you’ve been walking along. Unless of course, the wind was blowing in the right direction, then Mother Nature would do the hard work to the relief of many.

Although most remnants of this bygone era have been swept away through modernisation there’s still an old warehouse either side of the river and the remains of the quays.

Pass by the University Centre and towards the Frankwell Footbridge; look for a brass plate that indicates the height of recent floods. Imagine that back in 1795, the water level rose to 5.7m in height, and in November 2000 that record was almost broken.

Flood defence systems have been in place since 2000, notice the slots and base-plates designed to house demountable flood barriers. Further downstream reinforced walls and sheet steel barriers (up to 16m deep) limit the amount of groundwater that can penetrate under the defences.

Shropshire Walks along the River Severn aren’t complete without a bird’s eye view of the town. Once you’re up on the bridge look upstream over to the car park and cricket pitch. This is the Goose Land, known by this name for over 500 years. Most probably this was the site for an annual Goose Fair that would have been the highlight of the year, drawing droves of excited punters into the town for gaiety and merriment. 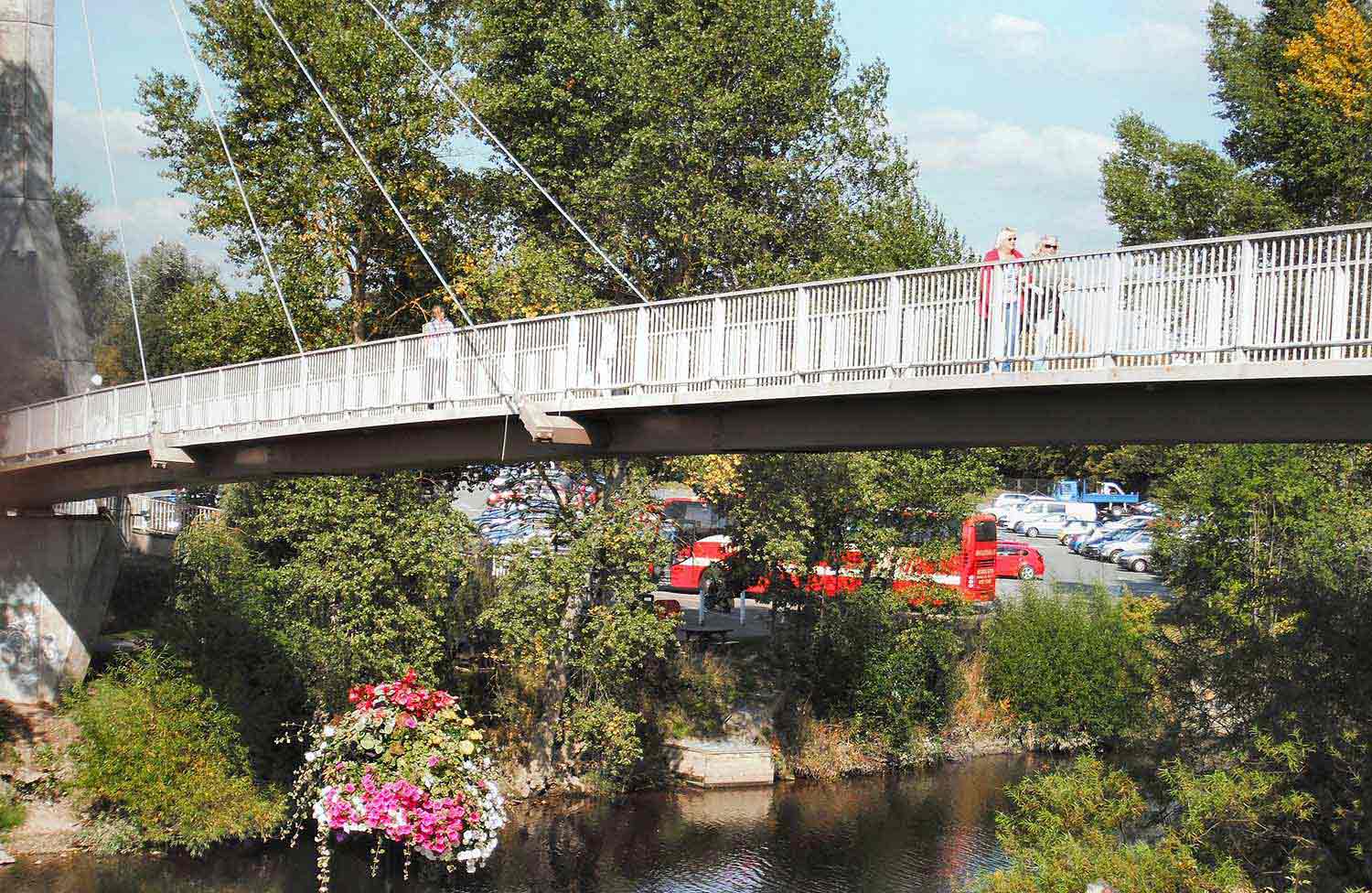 ‘”Frankwell Footbridge, Shrewsbury” by fogey03 is licensed under CC BY 2.0